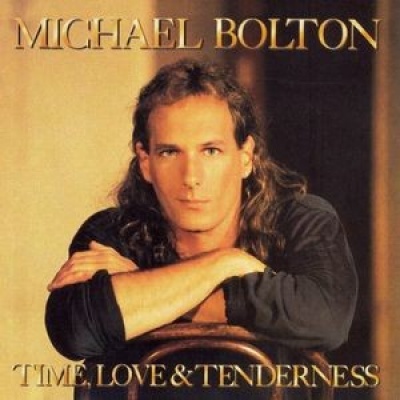 Michael Bolton cloned his approach from Soul Provider on its follow-up, Time, Love & Tenderness, and sold as many records for his trouble. (That's six million copies.) His key collaborator once again was Diane Warren, who applied her goldplated gift for writing contemporary love songs to six tunes, among them the hits "Time, Love & Tenderness" and "Missing You Now" (which featured saxmeister Kenny G). The obligatory R&B carbon copy was Percy Sledge's "When a Man Loves a Woman," which hit number one. The only unusual songs came at the beginning and the end. The album led off with "Love Is a Wonderful Thing" (a Top Ten hit), a song in standard '60s R&B mode that would be the subject of a plagiarism suit from the Isley Brothers, and it concluded with "Steel Bars," co-written by Bolton and...Bob Dylan? That's what it said, and if the song wasn't one of Dylan's best, it at least indicated that Bolton might have possibilities that had so far gone unnoticed.