Things Ain't What They Used to Be Review

Rex Stewart's cornet and the alto saxophone of Johnny Hodges were two essential ingredients in the rarefied chemistry of the Duke Ellington orchestra during the 1930s and early '40s. A large number of records were made during those years by ensembles which were essentially miniature editions of the Ellington band, fronted by some of his star soloists. In 2001 the Koch label reissued 16 recordings made by groups under the direction of Hodges and Stewart between November 1940 and July 1941. Ellington himself sat in at the piano, the bassist was Jimmy Blanton and the drummer was Sonny Greer. In addition to the leaders, some of Duke's primary wind players are heard on this very enjoyable collection: trumpeters Cootie Williams and Ray Nance; trombonist Lawrence Brown, tenor saxophonist Ben Webster and resonant baritone Harry Carney. Like Cootie Williams and Barney Bigard who led their own Ellington offshoot bands, Hodges and Stewart composed plenty of their own material; the Hodges persona is strongly pronounced in "Good Queen Bess," "Goin' Out the Back Way," "Squatty Roo," and "That's the Blues Old Man," which contains melodic seeds of both "Happy-Go-Lucky Local" and its famous offspring "Night Train." Stewart's uncommonly colorful and expressive technique is beautifully employed in "Mobile Bay" and "Poor Bubber," a tribute to one of Duke's earliest featured improvisers. Stewart growls through the horn like a lion to invoke Menelik II, late 19th and early 20th century Ethiopian emperor and anti-colonial resistance leader. This fine album closes with Stewart's tidy treatment of Ellington's "Subtle Slough," later known as "Just Squeeze Me." A sizable selection of earlier recordings by the Ellington Small Groups can be found on various compilations put out by several different labels under the banner of "The Duke's Men." This little package is a good place to start. 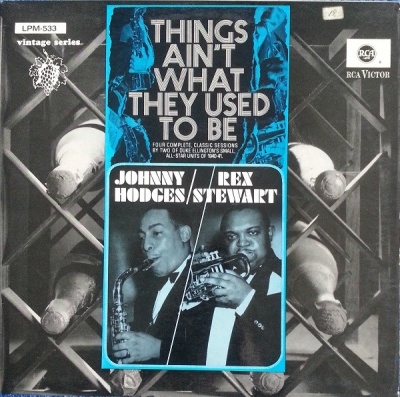 Things Ain't What They Used to Be Album Information