Bear in mind the old saying, "If it ain't broke, don't fix it" as the release of the soundtrack to the Broadway musical The Wedding Singer makes its splash on Broadway quite similar to the way the movie of the same name did, only with more music. The Wedding Singer is exactly based on the Adam Sandler movie, set in the '80s. Therefore, the album is filled with '80s references to music, games, events, and even business (In one song, the idea of investing in New Coke is suggested). The retro humor and music style, featuring electric pop sounds and hardcore rock beats, is refreshing; Wedding Singer doesn't play up a "Classic Broadway" sound, but rather offers a cute spin on the genre with Stephen Lynch at the helm, whose portrayal of Robbie Hart is endearing and amusing, even on record. Many of the songs are playable on disc without a staged visual, since anyone who's seen the movie can imagine what this might look like on-stage. However, large numbers such as "Saturday Night in the City," with its spaced out arrangement, and the finale (which, due to the appearance of so many new voices and characters, including a Filipino impersonator, becomes confusing and awkward) provide musical missteps that work wonderfully on-stage but do not transition properly on record. Many of the strongest recordings are actually from the movie, since they were originally composed by Sandler himself; as a comedic writer, he creates magic with "Grow Old with You" and "Somebody Kill Me," even if they aren't the most melodically challenging. Plus, there is only one genuinely show-stopping number, the opening track "It's Your Wedding Day," which gets an equally strong reprise at the end of the show. Overall, the cast recording is a feel-good sampling of the retro that you may have grown to love and miss, and the humor that is served in dollops is appreciated and enjoyed, even if the musical overall isn't overly original or critically acclaimed. Much like the original movie, The Wedding Singer doesn't attempt to change the world, rather, to tell the story of a boy and a girl who fall in love in the kinda-new old way. 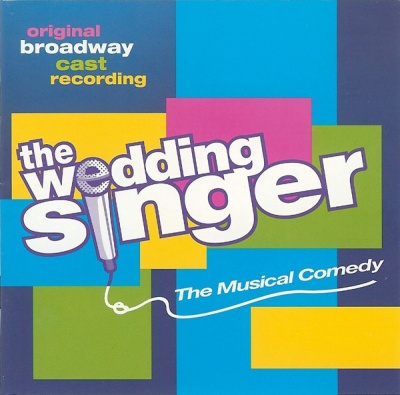