The Sounds of India Review

One of the early works of art created for the West by the Grandfather of World Music. This album stands as an early attempt to teach the curious western listener about the complexity and beauty of Indian music. Composer Alan Hovhaness provides some rather thorough liner notes describing the systems involved in Indian classical music (with the focus clearly on Hindustani forms), and goes into some detail on the finer points of the four ragas performed (Maru-Bihag, Bhimpalasi, Sindhi-Bhairavi, and Pancham-se-Gara, which is played during the piece titled "Dadra," actually a tala). Throughout the album, short lessons in the forms and techniques are given by Shankar himself before the various pieces are performed. For sheer musicality, something like The Genius of Ravi Shankar might be a better choice for a look at the earlier years, but for a historical document of both Shankar's amazing abilities, as well as his love of spreading the word for his music and teaching others, this album is perhaps better. For collectors, both albums would be wonderful additions to the collection, as early examples of World Music making its way into the non-native markets quite successfully. Give this one a number of listens for the music itself, and maybe a spare just for the history in it. 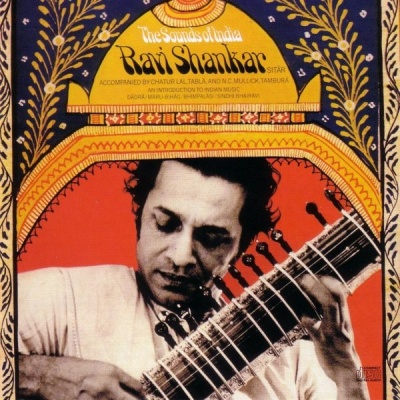 The Sounds of India Album Information