The Silver Lining: The Songs of Jerome Kern Review

The Silver Lining: The Songs of Jerome Kern functions as something of an answer to its predecessor, Cheek to Cheek. That 2014 duet album with Lady Gaga was suitably brassy and snazzy, relying on well-loved standards and pizzazz -- the kind of thing designed to stoke nostalgia vibes -- but The Silver Lining is a purer jazz record, an intimate songbook collaboration with pianist Bill Charlap; the difference can be heard simply in comparing the versions of "I Won't Dance" that pop up on the two albums -- the Gaga swings boldly, the Charlap rendition carries a wry resignation. Songbooks have been a standard item for Bennett throughout the years but if The Silver Lining recalls any specific album in the vocalist's discography, it's The Tony Bennett/Bill Evans Album, a record released in 1975 when Bennett dropped off the major-label radar and his name was perhaps as well-known to record buyers as that of Evans. While there may be a slight wattage differential between Bennett and Charlap, the difference is due to scale: Bennett is a household name; Charlap is a star among modern mainstream jazz fans. Accordingly, Bennett treats the pianist as an equal, giving him plenty of room to spin out long, liquid solos, passages that seem to glide out imperceptibly from his understated support. Often, The Silver Lining features little more than just the singer and the pianist -- when they're augmented by other musicians, it's just bass and drums, offering a bit of rhythm and color -- and this sparseness never seems austere due to the inherent warmth of the musicians' easy interplay, not to mention their individual voices. Both aspects are subtly showcased on The Silver Lining, and it's that delicate dance, where Bennett and Charlap enjoy playing together and apart, that makes this so charming. 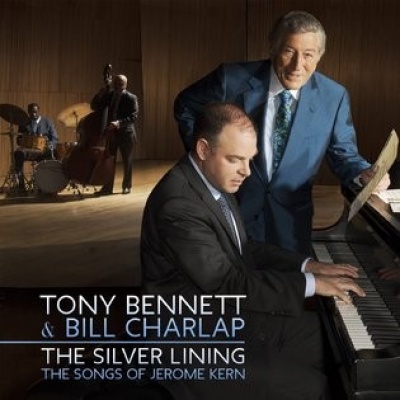 The Silver Lining: The Songs of Jerome Kern Album Information