On his first children's album, Tony Bennett presses into service some familiar titles from The Great American Songbook, such as Harold Arlen and Johnny Mercer's "Ac-Cent-Tchu-Ate the Positive," Jimmy Van Heusen and Johnny Burke's "Swinging on a Star," and Arlen, Billy Rose and E.Y. Harburg's "(It's Only) a Paper Moon." He also dips into his own repertoire for "Firefly," his 1958 hit. And he calls upon such partners as the Muppets' Elmo ("Little Things") and Kermit the Frog ("Bein' Green" and "Firefly"), and Rosie O'Donnell ("Put on a Happy Face"). All of that is very good, but the best parts of the collection are unexpected discoveries and commissions, such as Alan and Marilyn Bergman's newly written lyric for the Bill Evans-composed title song, Bobby Timmons and Oscar Brown, Jr.'s "Dat Dere" and Dr. Seuss' assertive declaration "Because We're Kids," with music by Frederick Hollander. The Ralph Sharon Quartet provides typically sympathetic accompaniment and a child's chorus jumps in here and there, while Bennett exudes his usual warmth, which is perfect for the mood of the album. 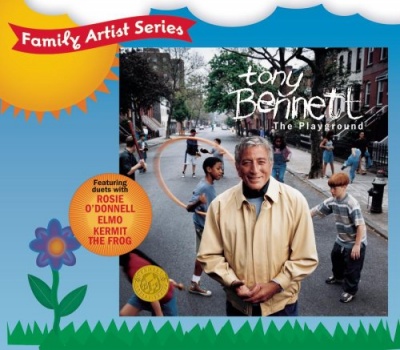