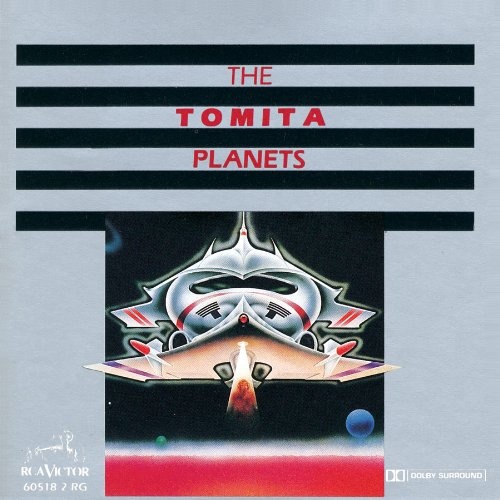 This was the most controversial Tomita album, where he uses Holst's spectacular, mystical suite The Planets as a launching pad for what amounts to a simulated spaceship trip through the solar system. Hence the title The Tomita Planets, which did not deter the Holst estate from trying (unsuccessfully) to pull this recording off the market at the time. When Tomita sticks to what Holst wrote, he follows every turn and bend of the score, save for a big cut in the last part of Jupiter and an eviscerated Uranus that nearly disappears altogether. Moreover, the music -- especially Venus -- often does lend itself to an electronic space flight fantasy, with Tomita's arsenal of phase-shifting, flanging, pitch-bending, envelope following and reversing choral effects and more on full display. It's the stuff between movements that provoked the purists -- the campy simulated mission control communications and electronic blastoff prior to Mars and the "noises" of space flight scattered throughout (including a nasty asteroid belt between Jupiter and Saturn). The most questionable idea was that of playing Jupiter's grand central theme on a tinkly electronic music box as a way to open and close the record -- which some will find satirical, others touching, still others tasteless. Indeed, Tomita seems to have it in for British pomp; when this theme is played within the context of Jupiter, he interrupts it with electronic chatter between mission control and the spaceship. Ultimately, The Tomita Planets is still good electronic fun, and it launched a series of space-themed concept albums by this electronic astronaut.