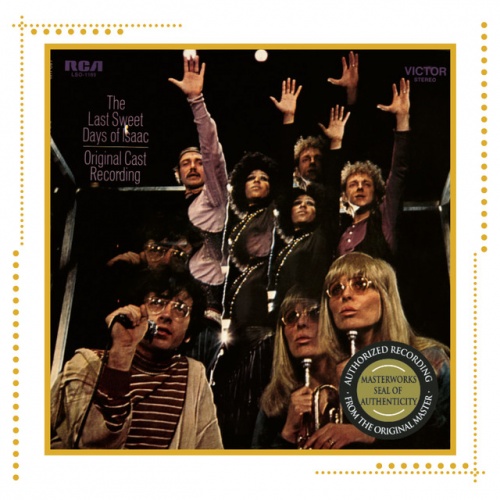 The success of Hair led to a spate of rock (and rock-style) musicals that mostly seemed more dated within a few years than many of the older-style Broadway and off-Broadway entertainments that they replaced. One can't be sure, of course, without actually seeing the work performed -- and it should be noted that the last time The Last Sweet Days of Isaac by Gretchen Cryer and Nancy Ford was revived in New York, sometime in the 1990s, the whole second act had been replaced by a section of a later work by the pair, so it isn't as though there's been much opportunity to see this piece as it was intended -- but The Last Sweet Days of Isaac might seem to be in danger of that trap. Its score drips with the late-'60s conception of rock music, albeit played with a considerable amount of credibility by the production's on-stage band, "The Zeitgeist" (consisting of Clay Fullum on electric piano and harpsichord, George Broderick on piano, Aaron Bell on bass, Art Betker on guitar, and Harry Gist at the drums). And yet, the cast, led by Austin Pendleton and Fredricka Weber, does well by the songs, and at least two of the numbers, "Somebody Died Today" and "Yes, I Know I'm Alive," had potential as free-standing songs, and the execution of the rest is not bad, and sounds less contrived as music than many parts of Hair's original cast seemed, very early on. Additionally, the book (which isn't really important for those listening to the cast recording) is willing to take chances with the audience -- near as one can make out, time's passage is rather fluid and even reversed in The Last Sweet Days of Isaac, which has a grim, serious undertone for all of its story's professed embrace of life; the titles of the two best numbers in the show, named above, sort of reveal that as well. This is a piece that might do well in a revival -- one is intrigued by what director Word Baker, brought to the original production, though obviously this was no rival to The Fantasticks, the legendary off-Broadway production with which he was most closely associated. The cast recording is worth tracking down, as a fine example of a musical subgenre that never really "took," on or off-Broadway, and to hear Pendleton in surprisingly good voice and Weber and the Zeitgeist sing and play their asses off. The sound is surprisingly good, and one would hope that this score, attached to an Obie-winning production in 1970 (with Pendleton getting the Drama Desk Award as well, for his work), might reappear in some CD context, someday -- perhaps as a collection of previously overlooked shows owned by Sony/BMG, in a limited-edition reissue?