Let's say, for the sake of argument, that someone who speaks little or no English is hearing The Kiss for the first time and knows nothing about Trin-i-tee 5:7's history. Perhaps he/she is from the Ukraine, or perhaps Ecuador (which isn't to say that there aren't people in those countries who speak English fluently). Chances are that the non-English-speaking listener would assume that Trin-i-tee 5:7 is a secular, urban contemporary group along the lines of Destiny's Child, Brownstone, En Vogue, or TLC. But in fact, the vocal trio's third album, The Kiss, is far from secular. Musically, The Kiss is urban contemporary/neo-soul with hip-hop elements, but lyrically, this CD is gospel. While The Kiss isn't gospel in the classic Mahalia Jackson/Clara Ward/Dorothy Love Coates sense, it does combine an urban contemporary/neo-soul groove with a gospel message. In terms of vocal power, Angel Taylor, Chanelle Hayes, and Adrian Anderson -- collectively Trin-i-tee 5:7 -- can hold their own against most of urban contemporary's secular female vocal groups. This is evident on the original material (most of it is memorable) that dominates the album, and it is evident on an inspired cover of the Impressions' 1965 classic "People Get Ready" (which became a civil rights anthem and is one of those songs that is loved in both Christian and secular circles). Although The Kiss is definitely promoting Christianity, Trin-i-tee 5:7 aren't in-your-face or divisive about it -- the expressive singers explain why Christianity works for them, but Jews, Muslims, Hindus, Sikhs, and Buddhists won't feel like their religions are being dissed. Whatever one's religious views, The Kiss is a pleasing example of how Christian-oriented lyrics can be relevant to 21st century R&B. 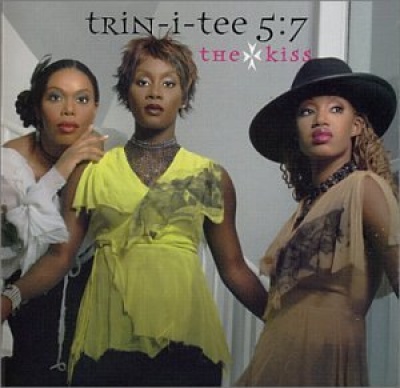