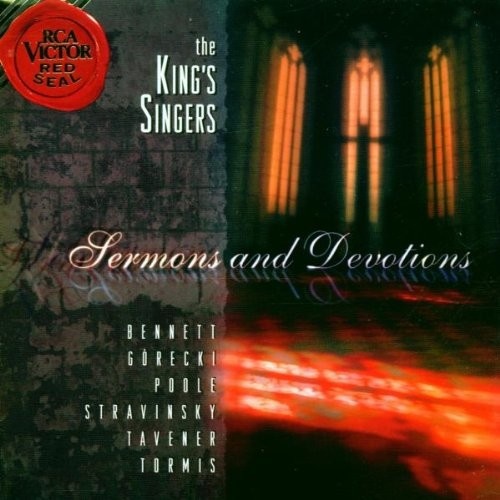 The chant boom of the 1990s revived interest in sacred works, and several contemporary composers of traditionally based choral music also benefited from the phenomenon. Such devoutly religious composers as Henryk Górecki and John Tavener, among others, were accorded special attention for their settings of ecclesiastical texts, and several choral ensembles rose to international fame for their albums in this vein. The King's Singers -- always keen to meet the public's demands -- recorded this collection of modern sacred pieces in 1995 with their usual odd mix of sublime beauty and kitschy insouciance. When serious and subdued, as they are in Górecki's Totus Tuus, Stravinsky's Pater Noster and Ave Maria, and Tavener's Funeral Ikos and The Lamb, this finely blended vocal sextet produces some of the loveliest sonorities on disc. But the group is also prone to theatricality and excessive liveliness, as in Veljo Tormis' Piispa ja Pakana, Geoffrey Poole's Wymondon Chants, and to a lesser extent, in Richard Rodney Bennett's Sermons and Devotions. All three works were expressly composed for the King's Singers, and were surely intended to receive boisterous interpretations. But anyone seeking a blissful or contemplative album will be jarred by their over-the-top singing, and find these pieces too filled with loud, rhythmic passages to be calming or conducive for meditation.