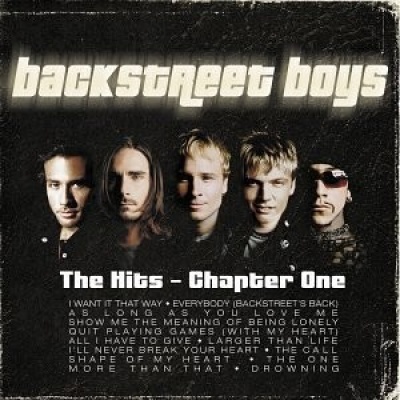 The Backstreet Boys were the first and best of the boy bands of the great teen pop bands of the late '90s/early 2000s, even if 'N Sync eventually usurped their title of "the biggest boy band." Their reign seemed long, but it really wasn't -- only three albums before the bottom started to fall out with 2000's Black & Blue. If everything had gone right, Black & Blue would have ruled the charts for about two years, but about a year after its release, the group and their label unleashed The Hits: Chapter One, a sure sign not only that Black & Blue didn't perform to expectations, but they were worried about the shifting tastes of their audience. Instead of reviving interest in the group, the collection instead felt like it was closing the door on their period of dominance (and it initially sold that way, too, barely making a dent on the charts). Even if it is a bit of an inadvertent last will and testament, it's a hell of a summation of the group's glory days, offering definitive proof that the group wasn't just the best of their breed (boy bands, that is; thrushes like Britney, Christina, Mandy, and Jessica are not taken into account here), but that their best moments transcend their era -- and there's really no other way to describe such lovely pop tunes as "I Want It That Way," "As Long As You Love Me," and "Quit Playing Games (With My Heart)," three songs that would have sounded perfect in any era (and their vocals would have worked in any era, too). Those are just the ballads -- the dance-pop numbers may be more tied to their era, but "Everybody (Backstreet's Back)" and "Larger Than Life" are infectious pop nonetheless. If the rest of the singles that fill out this 13-track collection aren't quite as good as those five songs (although "Show Me the Meaning of Being Lonely" is), they nevertheless are well-crafted, and those aforementioned singles are among the best mainstream pop of its time -- which is not only reason enough for this collection to exist, it's reason enough for pop lovers of any age or generation to have this as part of their library.