Sony Classical's "Collection" series is dishonestly titled; the three-disc sets contained therein are not samplers of an artist's best work or total output, but simply budget recyclings of early discs from the artist's catalog -- the ones for which sales are falling off. One might well wonder whether the youthful Hilary Hahn has laid the groundwork for a retrospective, but all Sony has done here is compile some recordings she made in the late '90s, when she was pushing 20. The good news in this case is that these were the recordings that made Hahn stand out from a crowd of young violinists, and it's more than worthwhile to have them in a single package. Hahn, the last student of Ysaÿe, combines a gleaming tone with a charismatic sense of involvement with the music. It's understandable that Sony has heavily promoted this young artist. She looks great. She blogs. And she delivers the goods, with innovative programs of familiar and unfamiliar works to boot. The Stravinsky and Brahms concertos on disc 3 are not a common pairing, and Hahn shows the depth of her training in the way she adapts her rather dry but highly ingratiating sound to these highly distinct circumstances. Her Beethoven violin concerto, with a third movement that crackles with crowd-pleasing energy here as it did in the performances of the great old-timers, is pleasingly balanced by Leonard Bernstein's Serenade for solo violin, strings, harp, and percussion, an evocation of Plato's Symposium that seems to have received something of a new lease on life. The opening disc of Bach solo violin works, recorded in 1997, benefits from the superb acoustic environment of the Troy Savings Bank Music Hall in upstate New York -- little details of Hahn's perfect technique were presented in sonic technicolor for all the world to hear. Each original CD comes complete with its own artwork and liner notes, unlike those of supposedly less cash-strapped European labels that shear reissues of liner notes and even texts of vocal works. All in all, for a symphonic presenter trying to attract young audiences while not shying away from mainstream repertory, Hilary Hahn is a gift. And for a holiday gift to anyone who has seen her in person, you could do a lot worse than this set. 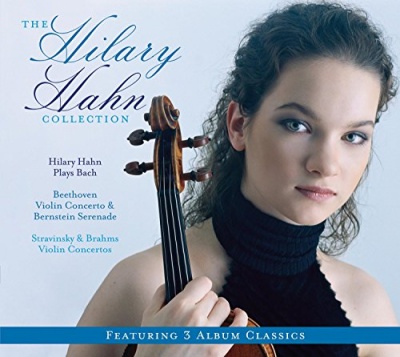