While an increasing number of up-and-coming artists are making a name for themselves by blurring the lines between rock, metal, rap, soul, dance, country, and about any other musical style you can think of, Phantom Planet is sticking with rock & roll. Pop/rock, if you want to split hairs, but isn't that basically redundant? Ironically, with the defection of so many artists to hybrid genres, The Guest comes off sounding incredibly fresh. It's hard to think of too many contemporary bands that are making such unapologetically sunny, pop-tinged rock & roll. Take the punk out of Weezer, the kitsch out of Fountains of Wayne, or the Strokes out of the garage, and you come pretty close. The album opens strong with four infectiously upbeat tracks that are singalongs waiting to happen. The songs are well-crafted and impressively mature for a band whose members are scarcely legal drinking age. The only misstep is the schmaltzy "Anthem," in which lead singer Alex Greenwald muses about writing a song that the entire planet falls in love with. The rest of the album flirts with some electronic touches, but never deviates too far from the original course. Greenwald's vocals remain heartfelt and confident throughout, although he seems to be channeling Thom Yorke in his quieter moments, such as "Turn Smile Shift Repeat." Phantom Planet distinguishes themselves by not being afraid to make a lush, textured album that avoids sounding glossy or overproduced. The use of strings and keyboards is subtle but effective. Indeed, the first single and opening track "California" employs a vital piano hook to hold the song together. What holds the entire record together, however, is Phantom Planet's knack for feel-good tunes with melodies that bounce into your head and stay there. 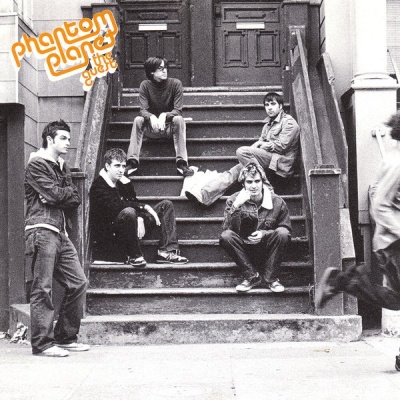