Although the sheer scope of this double-CD roundup of all of Dizzy's Victor sessions places it most obviously within the evolution of bebop, it is absolutely essential to Latin jazz collections as well. Here listeners find the discographical launching pad of Afro-Cuban jazz on December 22, 1947, when Cuban conguero Chano Pozo added his galvanic congas and bongos to Gillespie's big band for the first time on record. One can feel the explosive effect of Pozo's subdivisions of the beat, rhythmic incantations, and grooves on the band's bebop charts. Though the musicians' styles aren't much affected, and Pozo does most of the adapting to bebop rather than vice versa, the foundation has clearly shifted. Alas, aside from recorded live gigs, Pozo only made eight tracks with the band -- four on December 22 and four more eight days later, just before the second Musicians Union recording ban kicked in. Yet even after Pozo's murder the following year, Gillespie continued to expand his Latin experiments, using two Latin percussionists who brought more rhythmic variety to the sound of tunes like "Guarachi Guaro" (later popularized by Cal Tjader as "Soul Sauce") and even commercial ballads like "That Old Black Magic." The reprocessing of these recordings from late in the 78 rpm era through the CEDAR process sounds a bit harsh, though less so than most of RCA's earlier desecrations of vault material using NoNOISE. Even so, this remains the best way to acquire these seminal Latin jazz tracks. 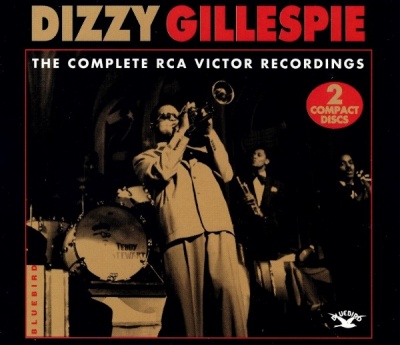