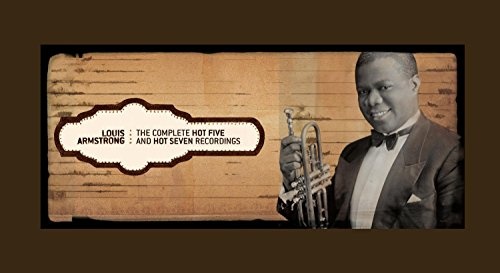 This four-CD set brings together all the recordings made during the period of the Hot Five and Hot Sevens along with all the attendant recordings that Armstrong was involved in during this breakthrough period. Although this material has been around the block several times before -- and continues to be available in packages greatly varying in transfer quality -- this is truly the way to go, and certainly the most deluxe packaging this material has ever received with the greatest sound retrieval yet employed. In addition to sounding better than the competition, it also sensibly lays out all the recordings Satchmo made during this period, grouping all the original Hot Five recordings from 1925 to 1927 (and all attendant material) together on the first two discs, all of the Hot Sevens on disc three, with the final disc devoted to the second coming of the Hot Five in 1928 along with the attendant material from the following year. There are also several categories of "bonus tracks" aboard this deluxe set, including the "Lil's Hot Shots" 1926 Hot Five Vocalion recordings, a 1927 Johnny Dodds session that became the prototype for the Hot Seven recordings that soon followed, and the only known alternate take of "I Can't Give You Anything but Love." You can't have a Louis Armstrong collection without this historic set. Come to think of it, you can't have any kind of respectable jazz collection without it, either. Beyond indispensable.