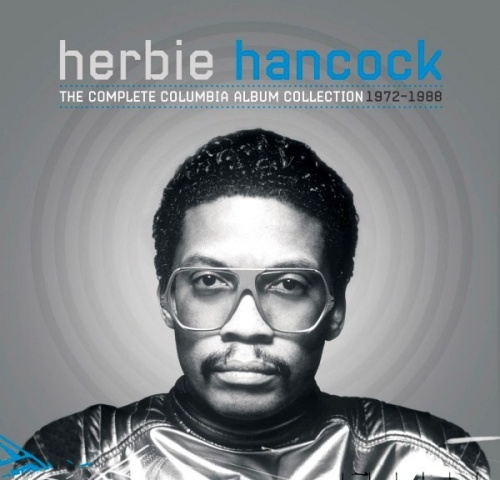 Herbie Hancock recorded for Columbia between 1972 and 1988. During that period, between the label's American and Japanese divisions, he released 31 albums, both solo and with an astonishing variety of players in an equally breathtaking panorama of styles, from straight-ahead post-bop, to fusion, jazz-funk, disco, R&B, smooth jazz, and even hip-hop. Though Hancock had a celebrated career before signing to Columbia, it was his longest label association; and during his tenure there, he experienced his greatest commercial success and his name was etched permanently into the history of popular music. This box set contains 34 discs -- 28 single and three double albums -- all housed in handsome individual LP and gatefold sleeves. Among them are eight records never previously issued outside of Japan: the solo sans overdubs Dedication from 1974, Flood (Head Hunters band live, 1975); The Herbie Hancock Trio (with Ron Carter and Tony Williams, 1977); Tempest (with V.S.O.P, 1977), Directstep (a full band, live in the studio, direct-to-disc, 1978); Five Stars (V.S.O.P. studio, direct-to-disc, 1979), Butterfly (studio, with Kimiko Kasai, 1979), Herbie Hancock Trio with Ron Carter + Tony Williams (studio, 1981). Three more recordings, Sunlight (1978), Magic Windows (1981), and Lite Me Up (1982), have never been previously issued in the United States on compact disc. There are several historic albums in this batch, among them, Sextant, Head Hunters, V.S.O.P.: The Quintet, the Death Wish soundtrack, Future Shock, and more. Many of these dates, particularly those from the disco and post-disco R&B eras, such as Feets Don't Fail Me Now, and Monster, deserve reappraisal for what they are in and of themselves -- pop records. The same goes for the jazz-funk Man-Child and even the post-Monster, R&B, pop, and jazz experimentation that resulted in Mr. Hands. The accompanying booklet is 200 pages, divided into three sections. Its centerpiece is an exhaustive 5,500 word essay by noted musician, historian, and producer Bob Belden. In addition, there is an album-by-album commentary by Max Schlueter, Hancock's historian and discographer, as well as a complete discography by Richard Seidel, which includes lineups, detailed recording data, original release dates, chart positions, and a shorter discography of Hancock's pre-Columbia career. There is even a glossary of instrumentation and terminology used. There are loads of well-known and rare photographs and sidebar commentaries, including one on David Rubinson, who produced all but six of these records. While it's easy to note that a project of this size will likely only appeal to Hancock's most ardent fans, music historians, and librarians, it is also worth noting that inside The Complete Columbia Albums Collection 1972-1988 is a defining portrait of a musician so diverse, restless, and creative -- one who has been profiled, emulated, imitated, sampled, and compiled so often -- that there are few in his class.