The Complete Collection and Then Some... Review

The story Barry Manilow, his friends and associates tell in the liner notes to his four-CD/one-VHS box set retrospective The Complete Collection And Then Some... is about a contemporary pop songwriter who is reluctantly transformed into an interpretive singer; becomes an easy-listening, commercial pop superstar to his surprise (and, to some extent, dismay); and, through travail, reclaims his original vision by writing and performing neo-classic pop with tinges of jazz and show music. The trouble with this story is that when you play the album, you still hear a lot of earnest, piano-based romantic ballads, the singer's own tunes virtually indistinguishable from those of others. David Martin, co-author of "Can't Smile Without You," frankly admits that he stole the song's title from a greeting card, but Manilow's own lyric collaborators don't dig much deeper. Manilow's real talents lie in arrangement -- he always puts in enough modulations, tempo shifts, and instrumental development to maintain interest -- and in his singing, which retains sincerity and some buoyancy despite the unrelieved plaintiveness of the melodies and lyrics. It's lonely housewife music, to be sure, but Manilow's performances transform it. His subsequent forays into Latin, jazz, classic pop, and show music are the works of an enthusiastic amateur, but no less winning for that, except for a few occasions that reveal a lack of taste. Like other box sets assembled in the early '90s, The Complete Collection And Then Some... tipped the scales more toward unreleased material. There were a few newly recorded songs, and a few that had been left off Manilow's regular albums, but the bulk of the previously unreleased material consisted of live performances, demos, and alternate takes. Many of the big hits are only heard in alternate versions, meaning that this was aimed at Manilow fans for whom the original demo of "Mandy," on which the singer accidentally sang "Brandy" (the song's original title), was more valuable. The set also included an hour-long video, Barry Manilow Performances, Volume One: The Highlights, which employed footage from Manilow's television appearances of the 1970s and '80s. [The Complete Collection was reissued in 2005 with a bonus fifth disc of DVD material.] 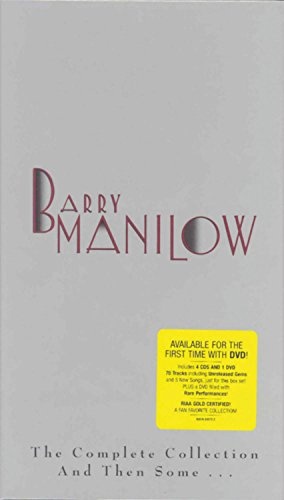 The Complete Collection and Then Some... Album Information