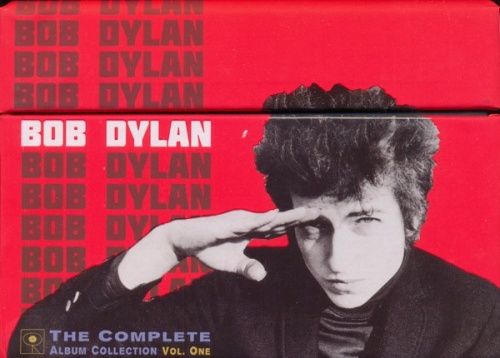 Like other entries in Columbia/Legacy's Complete Album series -- such as Johnny Cash's or Miles Davis' The Complete Columbia Album Collection(s) -- Bob Dylan's The Complete Album Collection, Vol. 1 houses a mammoth discography within the confines of an elongated box. Each of the albums -- and they're all here, each of the 35 studio albums from 1962's Bob Dylan to 2012's Tempest, plus the six live albums from 1972's Before the Flood to 1995's MTV Unplugged -- are here, presented as mini-LPs in cardboard sleeves replicating the original artwork: 14 of these albums, including Self Portrait and Empire Burlesque, see brand-new remasterings that bring the audio quality up to date with the rest of Bob's catalog. Although this contains none of the volumes of Dylan's ongoing Bootleg Series -- allegedly, those will comprise The Complete Album Collection, Vol. 2 somewhere down the road -- there are two additional discs of "Side Tracks," containing non-LP singles, B-sides, and stray songs released over the years. Many major songs are here -- Dylan's first stab at rock & roll, "Mixed-Up Confusion," mid-'60s gems "Can You Please Crawl Out Your Window?" "Positively 4th Street," and "I Wanna Be Your Lover"; songs that originally appeared as new cuts on Greatest Hits collections, including "Quinn the Eskimo," "Watching the River Flow," "When I Paint My Masterpiece," "Series of Dreams," and "Dignity"; the Oscar-winning "Things Have Changed" -- but there are still odds and ends missing, usually songs Dylan released on soundtracks or compilations. Some hardcore fans may gripe about the absence of, say, 1986's "Band of the Hand," but what's here in this massive box set is Dylan's core catalog, sounding and looking better than it ever has, all available at reasonable price, too.