The Birth of the Third Stream Review

In the mid-'50s Gunther Schuller came up with the term "Third Stream" to describe the musical experiments of the time that sought to combine together jazz and classical music. This CD has all of the contents from the earlier LP The Birth of the Third Stream and four of the six numbers (leaving out two advanced classical pieces) from Modern Jazz Concert. Those two albums were among the first and most publicizied of the Third Stream recordings. Strangely enough the orchestra utilized is essentially a large brass band with plenty of trumpets, trombones, French horns and baritone horns but at the most only a few woodwinds and no violins, violas or cellos at all. The most famous of the works are two that featured Miles Davis and preceded Miles Ahead ("Three Little Feelings" and "Poem for Brass") and George Russell's "All About Rosie" (which puts the focus on pianist Bill Evans). The other selections include Charles Mingus' "Revelations" and two compositions apiece by Jimmy Giuffre and Gunther Schuller. Although the short-lived Third Stream movement would be less influential than expected and would soon be overshadowed by free jazz, the music is still quite intriguing to hear four decades later. 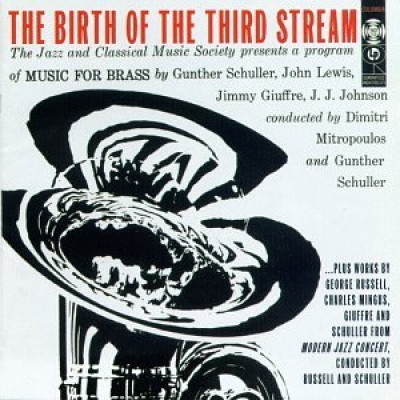 The Birth of the Third Stream Album Information