The Best of the Ohio Express: Yummy Yummy Yummy serves up 14 jaw-aching tracks from the chewy, chewy center of the late '60s synthesized pop music otherwise known as bubblegum pop. The efforts of the revolving-door stream of musicians who performed and recorded under the Ohio Express moniker is the focus of this succinct compilation that clocks in at shortly over a half hour. The Buckeye-based Ohio Express were originally called Sir Timothy & the Royals -- a teenage garage band working locally for weekend gigs such as parties, school proms, and so on. They were scouted by producers Jerry Kasenetz and Jeff Katz. Their unwillingness to take their cues from the hitmaking Kasenetz and Katz assured that any future autonomy would be doubtful. As had become the tradition with their labelmates and chart rivals the 1910 Fruitgum Company and the Lemon Pipers, recordings were issued by a band using the same Ohio Express name. Kasenetz and Katz released these records with little or no regard for the band formerly known as Sir Timothy & the Royals back in Ohio -- who were now also known as the Ohio Express. Confused yet? Their biggest hit, "Yummy Yummy Yummy," had first been offered to -- and rejected by -- Jay & the Techniques, who were searching for a follow up to "Apple, Peaches, Pumpkin Pie." The session musician and lead vocalist on the track so impressed the label, he was deemed the Ohio Express' lead singer. Other charting hits for the band included on this collection include: "Chewy Chewy," "Sweeter Than Sugar," and "Mercy." Nearing the end of Kasenetz and Katz's run with the Ohio Express was the country-rock flavor heard on "Sausalito (Is the Place to Go)." The backing group would eventually become the core of 10cc on this seminal Graham Gouldman composition. 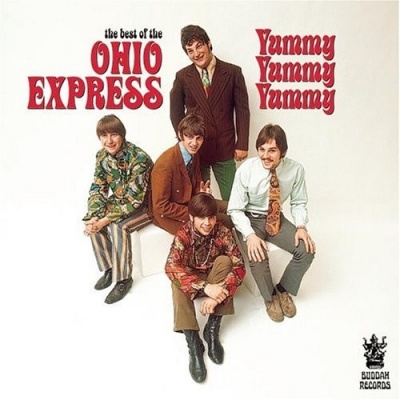