Well, that awkward goth phase didn't last long! With all the impatience of an ADD-riddled teen rebel, Avril Lavigne ditched the gloomy façade of her sophomore Under My Skin and dove back into the well-scrubbed mosh pit for her third album, The Best Damn Thing. Frankly, the change in pace comes as a bit of a relief. The serious Avril on Under My Skin never felt genuine -- the shift from the exuberance of "Sk8er Boi" to the meandering ruminations of "Don't Tell Me" and "My Happy Ending" seemed sudden and forced, a misguided attempt to prove that Lavigne was a serious songwriter -- so as soon as The Best Damn Thing opens with the bright bubblegum blast of "Girlfriend" and its cheerleader chant, everything within Avril's world seems right again. If anything, this third album feels even more adolescent than her aggressively catchy-n-shallow debut, Let Go, perhaps because this is an album where Avril is allowed to run wild. She can curse, spit, and strut to her heart's content, she can taunt her rivals and steal their boyfriends, then bitch out the boy for not understanding her once he belongs to her. She impatiently rushes through the power ballads -- there are only three of them, all impeccable melodic anthems designed to keep the crossover adult audience Let Go won, all better than their equivalents on Under My Skin -- because she can't wait to get back and raise hell like the spoiled brat that she's thrilled to be. Avril swears like she's just discovered profanity, cheerfully spitting out four-letter words (and their compounds) with glee, but everything she does here she does with unrestrained glee. She truly believes she's the best damn thing you've ever seen, she knows it's all about her -- or, as she shouts on "I Don't Have to Try," "I wear the pants!" -- and if you don't agree, she knows you're wrong and you can go to hell (actually, she'd probably say something a lot stronger).

This sense of entitlement will surely rankle anybody who's just a little bit older than Avril's 22 years, who will also find that the perennial Lavigne complaint holds: she ain't no punk, she's a brat that any grizzled old punk will want to beat with a baseball bat. (How do you know if you're one of the old guys? If you recognize the chorus of "Girlfriend" as a total lift from the Rubinoos' "I Wanna Be Your Boyfriend," you're an old guy, even if you're 20.) But The Best Damn Thing wasn't made for them, nor was it made with any sense (or even regard) for the past: it was made to exist totally in the moment, in a time when a moment speeds by faster than light. And, frankly, that's what's good about The Best Damn Thing: it's as exuberant, irreverent, and exciting as any other bubblegum pop, defiantly silly and shallow, but also deliriously hooky. If Lavigne didn't have the hooks -- if neither "Girlfriend" nor the title track weren't driven by cheerleader chants, if "Everything Back But You" didn't snarl like prime Green Day, if "I Can Do Better" didn't soar on its chorus -- her snotty attitude would be unbearable, but these are terrific, addictive pop songs that are harder and tougher yet feel fresher and lighter than her big hits from Let Go. True, this is far from deep, but Under My Skin proved that a deep Avril is a dull Avril. The Best Damn Thing, in contrast, builds on every one of her bratty strengths, which makes for ridiculously catchy pop -- the kind of music that provides a soundtrack for teens and guilty pleasures for everyone else. [The Best Damn Thing is available in a deluxe edition containing a bonus CD. The non-deluxe edition is a clean version of the album without the numerous profanities.] 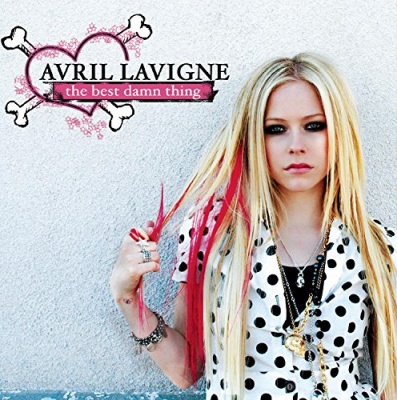