The Battle for Everything Review

Five for Fighting was struggling along, another nominal adult alternative pop/rock band led by a singer/songwriter, until something unexpected happened. A song from their second album, recorded for their second major label in a row, became an overnight hit, staying on the radio for months. Of course, things weren't quite as simple as that. The song was "Superman (It's Not Easy)," and the reason it was hit is that millions of listeners found that the song captured their hearts in the tragic, turbulent days following the terrorist attacks of 9/11. This would be a mighty heavy thing for an established artist to grapple with, but for John Ondrasik (who IS Five for Fighting; he chose a group name rightly believing that it was catchier and easier to remember than his name) it was a trickier thing, since he made his breakthrough with a song that moved many listeners at a very vulnerable time in their lives. Following up a career-making single like that is not easy, and Ondrasik took his time to deliver Five for Fighting's third album, slowly working with producer Bill Bottrell (best known for his work with Sheryl Crow) and eventually releasing The Battle for Everything in February 2004. The extra time was a smart move, since the delay between releases helped lower expectations while giving Ondrasik time to craft a record that's at once more assured and supple than its predecessor.

Though he throws in some rock elements, like the elastic bluesy slide guitar of "Infidel," he's unashamed about embracing the mantle of middlebrow adult alternative singer/songwriter, and he's turned in a very accomplished, professional record that illustrates he has more ambition than such younger peers like John Mayer. Where Mayer comes across like a cute collegiate singing to impress the girls, Ondrasik is deadly serious, as his song titles alone illustrate -- "Devils," "God," and "Angels" are all named, and he sings about "Dying" and an "Infidel." His music is appropriately somber and self-serious, reminiscent of the gloomy introspective side of Dave Matthews crossed with the cinematic scope of mid-'70s Billy Joel and the pompous narcissism of Sting, whose high careening voice was clearly an influence. Musically, this can result in some nice craftsmanship, and if judged merely on a sonic level it's one of the more interesting, detailed adult alternative records of recent years. But that pompous narcissism is his Achilles' heel, the thing that keeps wary listeners at bay. It was there on "Superman (It's Not Easy)," a song where he was wondering why other listeners didn't appreciate his talents, and it's scattered all over this record, as he makes references to "Superman" being sung at "Disneyland" and frames everything according to how it relates to him ("If God made you, he's in love with me"). This attitude undercuts his quite tangible musical skills, and while this record works well enough for most fans to give him a pass, it means it will win him few new ones unless he tempers his self-regard in the future. 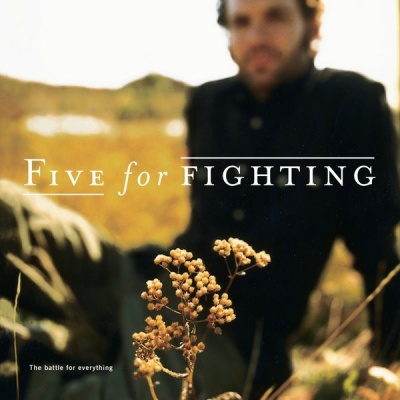 The Battle for Everything Album Information