RCA Victor's The American Album is the most daring and ambitious program undertaken by violinist Anne Akiko Meyers for RCA Victor and features some of the most challenging and invigorating music to be found among her early playing. The showpiece here is Meyers' rendering of Charles Ives' Sonata No. 4 "Children's Day at the Camp Meeting," in which she transits seamlessly from the elementary, student-like playing at the opening through the fierce transcendentalism in the middle section to the whimsical, scherzo-like final movement. Meyers' playing matches Ives' rub-your-head-while-you-pat-your-tummy requirements without losing her sense of line or even tonal beauty. Both of these elements are very much in play in Aaron Copland's Nocturne, an early piece combined in a set of two along with Copland's quaint Ukulele Lullaby, but held out separately here; Meyers exercises supreme poise and control over the whole movement. Her reading of Copland's Sonata for violin and piano likewise emphasizes continuity and tonal beauty, but when she needs to throw off fireworks, such as in the Allegro section of the first movement, you can practically see them sparkle. Walter Piston's neo-classic Sonatina for violin & piano -- intended for, but interchangeable with a harpsichord accompaniment -- is equal parts rugged Americana and puff pastry, and Meyers interlocks with accompanist André-Michel Schub and pulls it off with aplomb. Blues, composed by respected Indiana University professor and jazz musician David Baker, provides Meyers a chance to show off some soulfulness in material in more of a let-your-hair-down mode than the more serious and rigorous fare found elsewhere on the disc.

The packaging of this CD should not deter the listener from enjoying what was an extraordinarily brave program for a young, major-label artist want to say something about American music minus all the flag waving and bombast. Folks, never mind the cover; it's what's inside Anne Akiko Meyers' The American Album that counts. 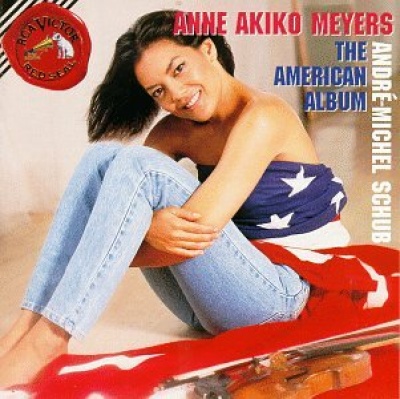