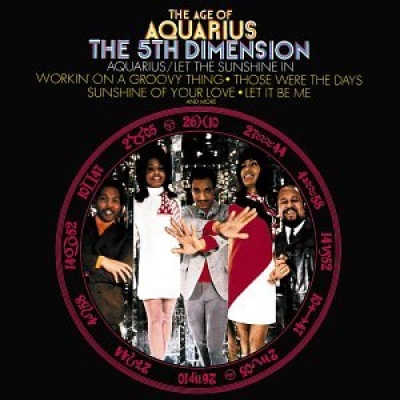 The Age of Aquarius, the 5th Dimension's fourth album, was the group's commercial peak. They had already topped the charts with their medley of two songs from the Broadway musical Hair, "The Age of Aquarius" and "Let the Sunshine In (The Flesh Failures)," a platinum single that would earn them Grammy Awards for Record of the Year and Best Contemporary Vocal Performance, Group, when they released this album. It turned out that was only the tip of the iceberg: They returned to number one with another platinum single, "Wedding Bell Blues," penned by Laura Nyro, who had given them "Stoned Soul Picnic" the year before. And the album also spawned Top 40 hits in Nyro's "Blowing Away" and Neil Sedaka's "Workin' on a Groovy Thing." The 5th Dimension were the successors to the L.A. vocal group mantle passed on by The Mamas and the Papas (they even inherited the studio band of Hal Blaine, Joe Osborne, and Larry Knechtel). They smoothed out and commercialized everything they sang, and their work had a sheen and a zest that sometimes contrasted with the original tone of the material. On Broadway, the Hair songs seemed full of hippie rebellion; here, they seemed enthusiastic and optimistic. In a conflicted time, the 5th Dimension thrived on their ability to equivocate, and this album was their triumph -- just listen to them harmonize on "Sunshine of Your Love"!