Something of a companion to the 2015 studio set The Cutting Edge -- the 12th volume in Bob Dylan's ongoing Bootleg Series that contained all of his studio recordings from 1965 and 1966 -- The 1966 Live Recordings rounds up every known recording Dylan made during the pivotal year of 1966, pairing audience tapes with soundboard recordings. If this isn't precisely the year Dylan went electric -- he released two albums of rock & roll in 1965 and he plugged in for a headlining set at the Newport Folk Festival that wound up polarizing the crowd -- it is the year that produced the most famous document of how divisive his decision was to embrace loud rock & roll: a concert given at the Manchester Free Trade Hall on May 17, 1966 and bootlegged for years as his "Royal Albert Hall" performance. Praised as one of the great rock & roll albums years before its official release in 1998 as the second installment in The Bootleg Series, it was marked by somebody in the audience yelling "Judas" at the notion of Dylan playing electric. On its own, the story would be legendary but the music was wild, raw, and vital -- and it just happened to be one night of many in 1966.

All those nights are gathered on The 1966 Live Recordings, a 36-disc box set that's not an installment in The Bootleg Series. That decision makes sense: The Bootleg Series is curated but this is a clearinghouse of every known recording from that year, a move that is quite clearly driven by Sony's need to release this material in order to preserve the copyright. This winds up being a blessing for the hardcore Dylan fan because The 1966 Live Recordings simply winds up offering an enormous amount of a very good thing. All the shows follow the same structure as the Manchester Free Trade Hall -- there is an opening acoustic set, then Dylan moves to playing electric with the Hawks, the backing group that later became the Band; not every recording contains a complete concert, and the set lists are often very similar. Manchester Free Trade Hall also offers a good indication of what's good on the box: the acoustic performances are often solid but the performances with the Hawks are where it's at. There, Dylan and the Hawks tap into a life source that's primal yet complex. It's as much how they're playing as the songs themselves, and that's why a deep dive into this box set is so rewarding: the songs may remain the same but the performances are vibrant and alive. For the serious Dylanphile, that's reason enough to acquire this hefty box. 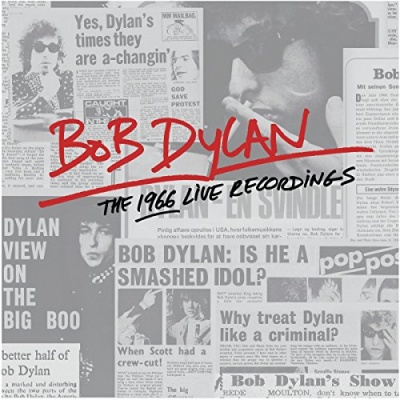