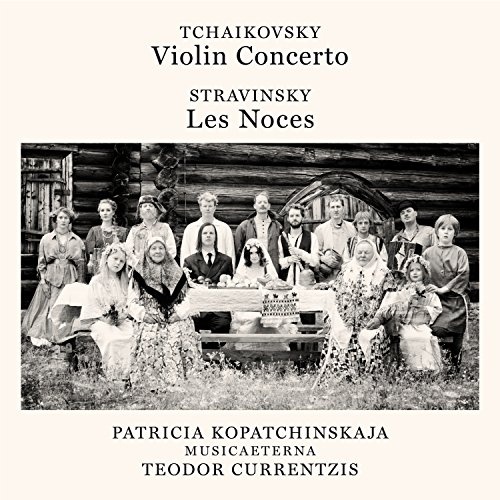 Iconoclastic conductor Teodor Currentzis and his MusicAeterna orchestra, way out in Perm (the hometown of Diaghilev, among others), are never dull in the least, and Currentzis deserves credit for rethinking Mozart, Rameau, and other music of the 18th century in fundamental ways. His Tchaikovsky Violin Concerto in D major, Op. 35, isn't dull, either, but with Tchaikovsky he enters a terrain where performance traditions have come down directly from the original performers of the music, and he disregards them. Reactions to this music are going to depend on the original, and the magic of Internet sampling will pretty quickly let you determine whether you find it brilliantly original or hopelessly idiosyncratic: in the first movement, violinist Patricia Kopatchinskaja enters quietly, in the manner of a strolling violinist. It's hard to imagine that Tchaikovsky would have felt this made any sense, but it hangs together on its own terms as Kopatchinskaja explodes into fireworks soon enough. The graphics emphasize a kind of spiritual meeting of the minds between conductor and soloist, and this is actually conveyed in this music and gives it a hard-to-pin-down positive X factor. Elsewhere, Kopatchinskaja continues to flirt with dynamic extremes, which is arguably in the general spirit of Tchaikovsky even if not of this particular work. So: there's a lot to chew on here, but be sure you know what you're getting into. The punchy performances of Stravinsky's Les Noces is another plus, although pairing it with the Tchaikovsky may well be taken as another example of Currentzis' propensity for the outrageous. A worthwhile outing from one of the most controversial conductors of the 2010s.