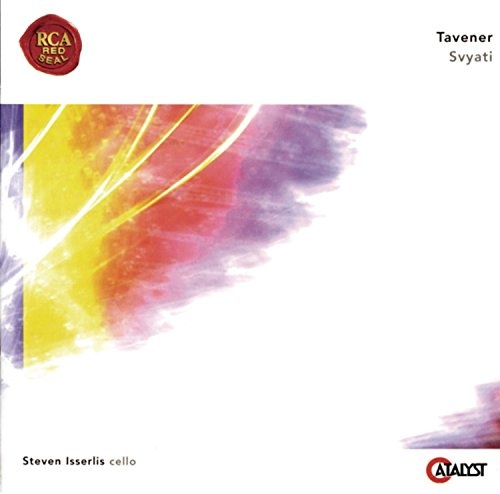 Since the composition of The Protecting Veil in 1987, the cello has played an important role in John Tavener's music. Even when he was writing for instruments during the 1989-1995 period when the music on Svyati originated, Tavener's works carried strong overtones of Russian Orthodox church services, and the cello here, as Tavener himself points out, sometimes seems to stand in for the voice of a priest. These pieces have been recorded before, but cellist Steven Isserlis, who premiered The Protecting Veil and some of the works included here, sheds valuable light on this phase of Tavener's career by bringing them together on one disc.

The five works included are quite diverse, with the cello playing a slightly different role in each. The most typical of Tavener's predominantly choral output, as well as perhaps the most successful of the five, is the opening work and title track; Svyati is based on a segment of the Russian Orthodox liturgy known as the Trisagion ("O holy God, holy and strong, holy and immortal, have mercy on us") that carries special impact during a funeral service. Tavener wrote the work after the death of a friend, and it gradually brings the intonations of cello and choir together over each of its two halves. The Kiev Chamber Chorus is just one of several fine Russian ensembles performing the English-Russian music on this disc. The veteran Moscow Virtuosi under Vladimir Spivakov excel in the three-movement Eternal Memory, which rises in an Ivesian fashion from calm to disorder and then returns to its opening mood. Tavener's five Akhmatova Songs, settings for soprano and solo cello of texts by the Russian poet Anna Akhmatova, are more dramatic and varied in mood than most of his other works; concise and intense, they are beautifully realized here by Isserlis and the soprano with whom he premiered them, Patricia Rozario. The disc is rounded out by the less instrumentally successful string quartet The Hidden Treasure and by a solo cello piece, Chant. Like Arvo Pärt, Tavener has been known for reworking pieces into new forms and new media, and The Hidden Treasure is related to Tavener's The Resurrection.

RCA's engineers unite performances recorded at different times and in different places into a coherent whole, and the disc may serve as a good introduction to Tavener's music for those who would rather avoid his explicitly religious large choral works. One complaint in the presentation: if just one less artsy abstract photograph had been included, that would have made room for Russian and transliterated texts of the Akhmatova Songs. Svyati is recommended for lovers of Tavener's music and especially for instrumentalists and presenters who are curious about his ability to write music on a smaller scale.