Kelis has shown how deviating from the norm can get you pegged falsely -- in her case, as an extraterrestrial being the Neptunes had beamed down from another planet. Maybe the orange-hair-and-body-paint photo on the cover of Kaleidoscope didn't help. And it's safe to say that none of her contemporaries would've ever thought of screaming something like "I hate you so much right now -- uuuugh!" for the chorus of a debut single. Otherwise, Kelis is as down-to-earth as they come; she just doesn't fit the mold of what has been expected in a female R&B artist the past few years (or ever). From a commercial standpoint, this has worked to a disadvantage: Wanderland, her second album, wasn't even released in the U.S. by Virgin, even though it was every bit as fresh and rainbow-dappled as her debut. Just before slipping completely out of view, the Neptunes set her up with Star Trak and dusted off Wanderland's "Popular Thug" -- with Pusha T wiped off in favor of new verses from new fiancé Nas -- for their Clones compilation. That set the table for Tasty, which actually involves less Chad and Pharrell, who produce only five tracks this time around; Dame Grease, Dallas Austin, Raphael Saadiq, Rockwilder, and Andre 3000 pick up most of the production duties. Despite all the new assistance, Tasty is formatted much like Kaleidoscope and Wanderland, constantly swinging back and forth between bouncy pop and laid-back (not throwback) soul. Just the same, the favorable quality level is another recurring characteristic, with only a couple miscues thwarting perfection (you're hereby advised to skip past "In Public"). Lead single "Milkshake," a coquettish playground tease, is the brightest moment of all; built around blaring synth-funk stun riffs, pitter-patter hand percussion, and a singalong taunt of a chorus, it's every bit as suggestive as Vanity 6's "Nasty Girl," the Mary Jane Girls' "In My House," and Monifah's "Touch It," with all three serving as musical -- not just lyrical -- points of reference. On some other planet, at least ten other songs here hit the Top Ten. Regardless of whether or not Kelis is one of us, we clearly don't appreciate her enough. 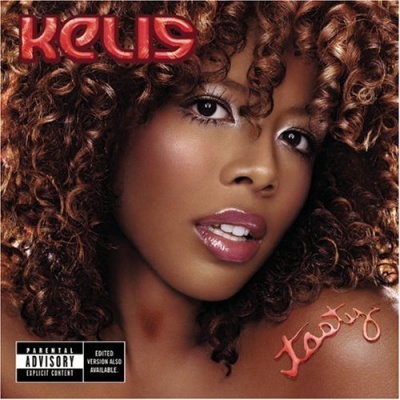