There have been many reissues of Carole King's iconic 1971 album Tapestry, and rightfully so. Perfectly conceived, produced, and executed, it continues to resonate with virtually anyone who hears it. It became one of the defining (and best-selling) records in the history of pop. This recording documents, if the press materials are to be believed, the first-ever concert performance of Tapestry in its entirety in London's Hyde Park in front of some 60,000 people. King is decades older for one, which might have proved daunting -- especially when considering the caliber of musicians who played on the LP sessions: saxophonist Curtis Amy, guitarists Danny "Kootch" Kortchmar and James Taylor, bassist Charles Larkey, and vocalist Merry Clayton, among others.

This audio/video document more than satisfies. Kortchmar is still an integral part of the band and, save for veteran Zev Katz on bass and King, are the only baby boomers on-stage. King has continued to perform with few breaks and remains vital, every bit the athletic pianist and resonant, expressive vocalist -- there's a tiny bit of grain during the first few numbers, but they add, not detract; when she warms up, you'd never know she was her mid-seventies. It's worth taking in the video portion at least the first time through. (The CD and DVD are identical in song presentation and both are offered in pristine sound.) First there are a series of tributes on the big screen before she takes the stage: Narration by Tom Hanks, and comments by Tapestry producer Lou Adler (who says it took three weeks and cost $22,000!), David Crosby, Graham Nash, Kortchmar, Taylor, songwriters Barry Mann & Cynthia Weill, and Elton John, who credits King with his entire songwriting career. When the band takes the stage, they dig right in and go for broke on "I Feel the Earth Move." "So Far Away" is offered with a lifetime of regret, sorrow, and acceptance with stills of the session team on the big screen behind the band. King offers short reminiscences between songs, but the performances are far from nostalgic; they are technically solid, and energetically loose enough for a live stage. The video projections, interspersed with shots of a multi-generational audiences, underscore the emotional impact of these songs. King's daughter Louise Goffin joins the band for "Where You Lead" and "Will You Love Me Tomorrow," which are given a new poignancy in this presentation. King even straps on a Stratocaster for "Smackwater Jack." When she and the band finish the album, she takes the stage solo for a Goffin/King medley to offer a wider view of her career; they are snippets, but she pulls them off with finesse. The band rejoins for "Jazzman," "Up on the Roof," and "Locomotion" before the cast of Beautiful: A Carole King Musical joins the band for a send-off with a reprise of "You've Got a Friend." Audio, video, or both, this is a fantastic version of a bona fide classic. 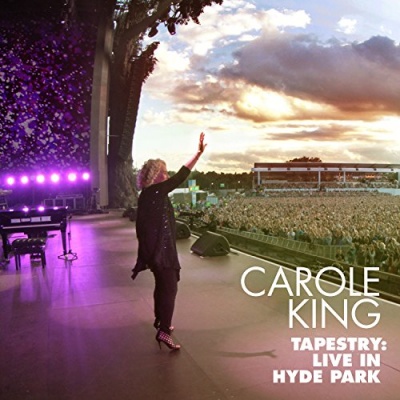