Swinging into the 21st Review

The 2012 Columbia box set Swinging into the 21st collects all of trumpeter/bandleader Wynton Marsalis' ten albums released in 1999. An ambitious project approved by Columbia due to Marsalis' highly respected career and longstanding association with the label, Swinging into the 21st featured a mix of large- and small-group sessions in various cross-genre settings from classical and ballet to big band, all connected by the theme of jazz. In that sense, each album was a logical extension of Marsalis' career and musical inclinations up to that point and, as such, generally featured the more traditional New Orleans-based jazz approach he began to favor in the early '90s. This is true even when exploring such divergent musical entities as Thelonious Monk on Standard Time, Vol. 4: Marsalis Plays Monk and Jelly Roll Morton on Standard Time, Vol. 6: Mr. Jelly Lord. Also included here is The Marciac Suite, At the Octoroon Balls: String Quartet No. 1, A Fiddler's Tale, Reeltime, Big Train, All Rise, and a single disc of selections from the box set Live at the Village Vanguard. The best cuts from the Swinging series were the small-group sessions where Marsalis and his septet got to stretch out with longer solos and inspired group interplay, as on the rollicking New Orleans second-line number "Juba and a O'Brown Squaw" from Live at the Village Vanguard and "King Porter Stomp" from Mr. Jelly Lord. Also engaging are the slightly more modern tracks, including two roiling, cubist Thelonious Monk numbers, "Hackensack" and "Green Chimneys," which Marsalis worked up for Marsalis Plays Monk. While his small-group recordings are certainly a highlight here, Marsalis' extended large-ensemble pieces such as the bluesy "Loose Duck" from The Marciac Suite and the lyrical violin-led ballad "Morning Song" are superb orchestral jazz recordings that, as with all of Swinging into the 21st, showcase the urbane and always swinging mind of Marsalis. 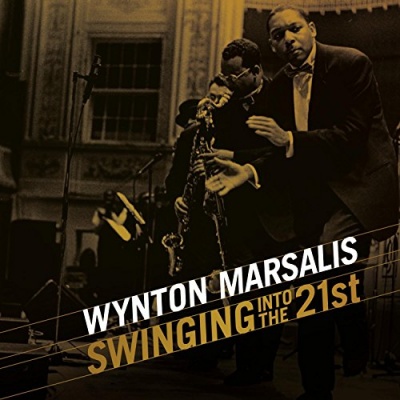 Swinging into the 21st Album Information