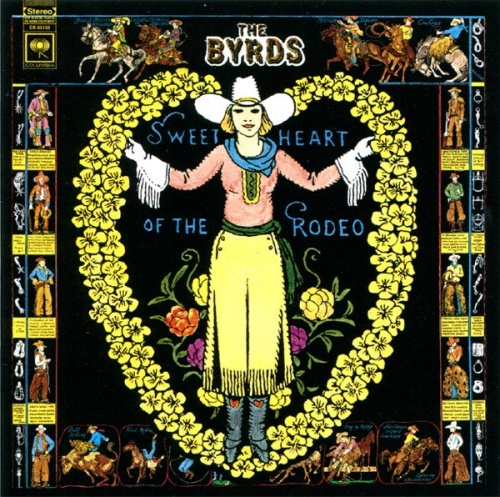 The Byrds' Sweetheart of the Rodeo was not the first important country-rock album (Gram Parsons managed that feat with the International Submarine Band's debut Safe at Home), and the Byrds were hardly strangers to country music, dipping their toes in the twangy stuff as early as their second album. But no major band had gone so deep into the sound and feeling of classic country (without parody or condescension) as the Byrds did on Sweetheart; at a time when most rock fans viewed country as a musical "L'il Abner" routine, the Byrds dared to declare that C&W could be hip, cool, and heartfelt. Though Gram Parsons had joined the band as a pianist and lead guitarist, his deep love of C&W soon took hold, and Roger McGuinn and Chris Hillman followed his lead; significantly, the only two original songs on the album were both written by Parsons (the achingly beautiful "Hickory Wind" and "One Hundred Years from Now"), while on the rest of the set classic tunes by Merle Haggard, the Louvin Brothers, and Woody Guthrie were sandwiched between a pair of twanged-up Bob Dylan compositions. While many cite this as more of a Gram Parsons album than a Byrds set, given the strong country influence of McGuinn's and Hillman's later work, it's obvious Parsons didn't impose a style upon this band so much as he tapped into a sound that was already there, waiting to be released. If the Byrds didn't do country-rock first, they did it brilliantly, and few albums in the style are as beautiful and emotionally affecting as this.