Prior to the breakthrough viral success of their 2010 single, "Pumped Up Kicks," Los Angeles' Foster the People were a relatively unknown studio project for singer/songwriter Mark Foster. Four years, a full-length debut album (2011's Torches), numerous tours, and two Grammy nominations later, Foster the People are a tested live act with a strong, expectant fan base. The band's 2014 sophomore album, Supermodel, finds Foster and company sticking to their winning pop formula, while evincing a more organic, less claustrophobic studio sound. Produced by Foster, along with Paul Epworth (Adele, Bruno Mars, Florence + the Machine), Supermodel is full of infectious music that touches upon '80s-influenced dance-rock ("Coming of Age"), soulful psychedelia ("Pseudologia Fantastica"), and melodic acoustic rock ("Ask Yourself") in equal measure. Prior to "Pumped Up Kicks," Foster the People were pretty much a studio entity, and Supermodel does reveal a more live-sounding aesthetic that feels bigger and more Technicolor in approach than Torches. Epworth and Foster expand the group's sound with brassy horns, echo-chamber guitars, gigantic, circular drumbeats, shimmery synthesizers, and, in the case of "The Angelic Welcome of Mr. Jones," layered, Beach Boys-influenced group harmonies. While nothing hits with quite the same intensity of zeitgeist as "Pumped Up Kicks," Foster proves his knack for coming up with hummable pop hooks, and tracks like the funky "Best Friend" and Afro-pop-infused "Are You What You Want to Be?" stick in your ears as much as they get your feet tapping. Additionally, if Torches scratched the surface of twenty-something angst, then Supermodel takes that exploration a few steps deeper, revealing a more introspective, enigmatic, world-weary tone. On "Pseudologia Fantastica," Foster croons, "Faded and worn at the seams/A psychotropic wanderlust/Sick and laughing their words/Bared their teeth into the wall/I promised I'd rid this world of feral animals." 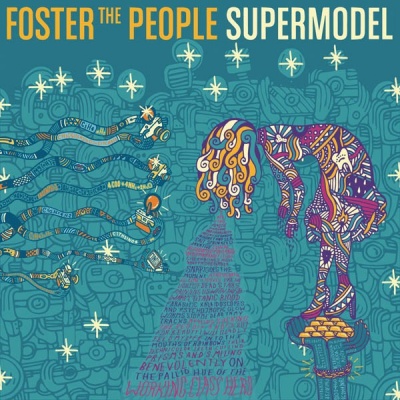