Tyler Farr had a hit with the slow-crawling menace of "Redneck Crazy," a tune where he seemed neither backwoods nor mad, but its masculine gait fit the outer reaches of bro country in 2013. Two years later, Farr returns with Suffer in Peace, a bigger, beefier record that also marches to a deliberate beat. Often, Farr recalls the sour Jason Aldean, a connection underscored on the duet "Damn Good Friends," where the pair neither seem like friends nor like they're having a damn good time. Part of the reason Farr doesn't seem like the liveliest of characters is the tyranny of the midtempo pace on Suffer in Peace. Even the nominal party songs don't move along at a quick clip; they swing low and heavy, like a pair of the Truck Nutz Farr salutes on "C.O.U.N.T.R.Y." Such steady rhythms, combined with a fondness for minor keys and Farr's begrudging gruff huff, means Suffer in Peace sometimes lives up to the promise of its title, seeming to favor its misery a little too strongly, but it does have its charms. Usually, they're the outright ballads -- the stately, sad title track and its doppelganger "Criminal," and the drinking ballad "A Guy Walks Into a Bar" -- but these would've been placed in sharper relief if there were a fast tune or two as contrast. Then again, happiness just doesn't seem to be Tyler Farr's thing: he's the guy scowling in the corner as he sips a beer. 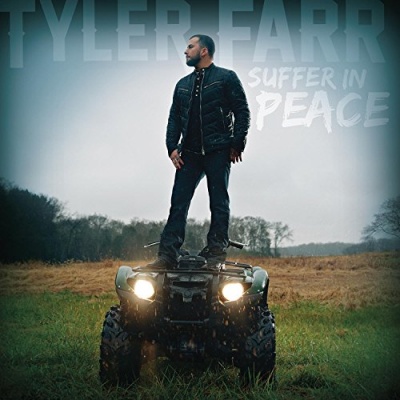