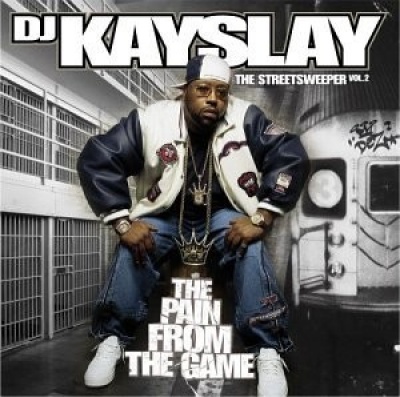 The Pain from the Game, the second volume of DJ Kayslay's Streetsweeper series, rounds up a lot of big-name rappers and some imposing beats for a grand mixtape of major-label quality. Kayslay's previous Streetsweeper volume followed a similar format, but it wasn't this impressive. The rappers were there and so was the major-label quality, but the beats were relatively ho-hum and so was the overall mix itself. It just didn't gel like it should have. It was scattershot -- most tracks simply freestyles, others fuller-fledged songs -- and it was all the more so because Kayslay's track-to-track mixing was patchy at best. The Drama King has stepped up his game for The Pain from the Game, thankfully, and the result is regal. Among the inclusions are Ghostface Killah, Scarface, 50 Cent, Eminem, Cam'ron, Fat Joe, Joe Budden, Lil' Flip, E-40, LL Cool J, Noreaga, Lil Jon, David Banner, Bun B, Three 6 Mafia, Prodigy, Raekwon, and AZ, most of whom get lively beats to work with, some of the more noteworthy producers including Clark Kent, Kanye West, and Swizz Beatz. This mix isn't all about big names and hot beats, however. It's also quite regionally diverse. Note particularly the Southern inclusions: the one-two punch of "Drama" (Lil Jon, David Banner, Bun B, Baby D) and "Who Gives a... Where You From" (Three 6 Mafia, Lil Wyte, Frayser Boy), which is at odds with most everything else here but nonetheless welcome. Other exceptional inclusions are "Hands on the Pump" (a great throwback beat by Clark Kent), "I'm Gone" (an aggressive Eminem/Obie Trice freestyle most noteworthy for its stuttering beat, also by Em), "Harlem" (crazy beat, tight Cam'ron freestyle), "Don't Stop the Music" (a smooth song with a nice Lil' Mo hook), "The Truth" (a tell-all LL Cool J freestyle in the manner of Nas' "Last Real Nigga Alive"), and "Alphabetical Slaughter" (a dexterous freestyle in which Papoose goes from A to Z dizzyingly). On the other hand, there are some dull tracks, among them G-Unit's "Angels Around Me" and some of the many Stay Gettin' productions. But The Pain from the Game overall is rarely dull, and is chock-full of highlights instead. Plus, unlike the first volume, the track-to-track mixing is smooth, which helps a lot. This is how major-label mixtapes should be done.