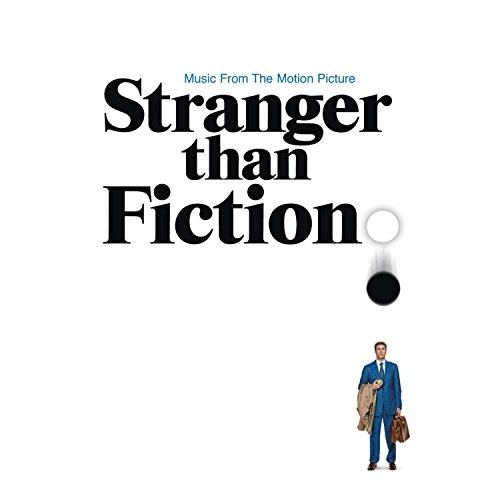 Stranger Than Fiction's loopy tale of a man who discovers his life is a story written by a novelist attempting her comeback echoes Charlie Kaufman and Spike Jonze's high-concept films about sad sacks going through strange life changes, so it makes sense that its soundtrack has a similarly quirky, arty vibe. Stranger Than Fiction literate indie-rock as well as excerpts of the score that Spoon's Britt Daniel and Brian Reitzell (who compiled the soundtrack) composed. Given that Spoon's 2005 album was named Gimme Fiction is a witty choice to include on the soundtrack to a film revolving around writing, books, and publishing, but even though the album includes four Spoon songs, their use isn't gimmicky. The previously unreleased "The Book That I Write" kicks off the soundtrack with a classic-sounding melody reminiscent of Gimme Fiction's poppier moments (or even a Billy Joel or Hall & Oates hit from the early '80s) while "The Way We Get By," with its literate lyrics and hooks upon hooks, shows the band at the peak of its powers. Likewise, Maxïmo Park's "Going Missing" boasts clever wordplay and new wave-inspired melodies, but Reitzell also goes to the source, gathering three of post-punk and new wave's finest moments. Delta 5's "Mind Your Own Business" became something of an anthem in 2006 after the band's work was reissued earlier that year, and its simultaneously brash and aloof power is potent here. Meanwhile, Wreckless Eric's "Whole Wide World" -- one of the era's greatest singles that hasn't been played to death, like too many new wave classics -- and the demo version of the Jam's "That's Entertainment" add to Stranger than Fiction's custom-made mix feel. Equally unconventional but more atmospheric tracks, such as the Upsetters' "Dubbing in the Back Seat" and Vangelis' "La Petite Fille de la Mer," add depth to the album and blend well with Daniel and Reitzell's intimate score pieces, which have an engaging simplicity. The glowing organ and twangy guitars on "Flours" recall Painful-era Yo La Tengo, while "Auditor" skitters along on cheap and cheerful keyboards and drum machines. Stranger Than Fiction could have easily been a painfully hip collection of music, but it works so well that it ends up being just as enjoyable as a set of songs in its own right as it is in the film's context.