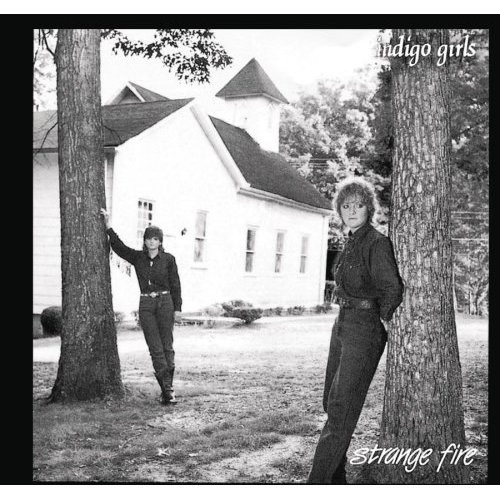 Strange Fire, the Indigo Girls' debut album, was re-released after their next album Indigo Girls hit big on college radio in 1989. The beautiful harmonies of college friends Amy Ray and Emily Saliers was immediately apparent on this album, the two-girls-with-guitars format felt like a breath of fresh air from a musical city (Athens, GA) known more for alternative acts such as the B-52's and R.E.M. Although most of the songs featured both women's voices complementing one another, it is clear that the songwriting came from two distinct sources. Emily Saliers, a talented guitarist, generally sings introspective songs in the tradition of folkies such as Joni Mitchell, whereas Amy Ray, whose influences include harder-edged acts such as Hüsker Dü, sings with a rare intensity only matched by the heavy strumming of her acoustic guitar. At this stage, the Indigo Girls are still developing and their lyrics suffer in comparison to their future efforts, which perhaps explains why the fiery, upbeat, and passionate songs of Amy Ray work better than the spare, mellow songs of Emily Saliers. They perform a cover of the Youngblood's "Get Together" that is every bit as good as the original, and their closing song "Land of Canaan" is a concert favorite. A must-own for fans, but casual listeners should start with their sophomore effort.