The soundtrack to the apocalyptic thriller Strange Days gathers a bevy of alternative rock acts, most better-known for critical kudos than their commercial clout, meaning that it's a treat for true music fans but of little interest to casual listeners. Kicking things off with politico-rockers Skunk Anansie and lead singer Skin's corrosive vocals on "Selling Jesus" (the act also contributes "Feed"), the album is aggressive and chaotic, capturing the film's tense, end-of-the-millennium setting. Highlights include Tricky's loping, hypnotic "Overcome"; Dream Academy alumnus Kate Gibson's lovely reading of Leonard Cohen's "Dance Me to the End of Love"; and Satchel's skittish "Walk in Freedom." There's also the odd-couple pairing of Prong and Ray Manzarek breathing new life into the venerable, classic "Strange Days," and a fiery performance by folk-rapper Me Phi Me on "hereWEcome." Of interest to completists will be Peter Gabriel (with Deep Forest) doing "While the Earth Sleeps," and the curious will want to check out actress Juliette Lewis' passable performance on "Hardly Wait." 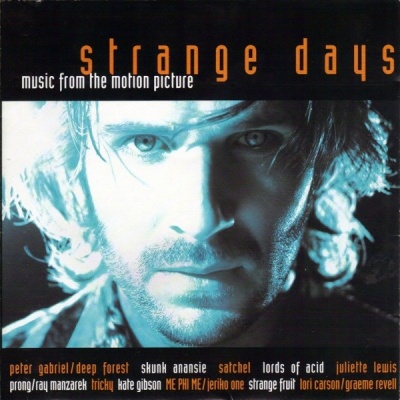