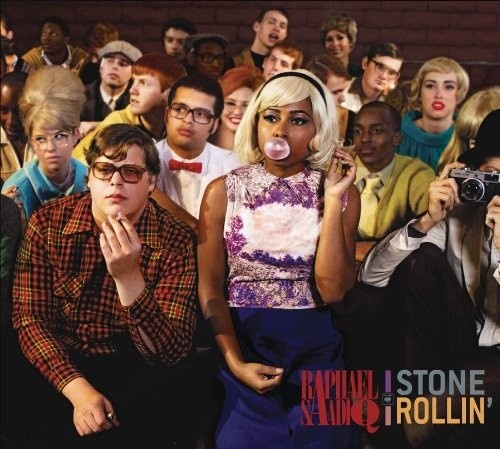 Stone Rollin’, Raphael Saadiq's second Columbia album, cuts straight to the chase. It begins with a tambourine-accented pounding groove à la Sly & the Family Stone's “Dance to the Music,” adding grinding rhythm guitar and making a plea of a different kind: one of co-dependent desperation, served up Holland-Dozier-Holland style. Indeed, Stone Rollin' is a little less clean-cut than 2008’s The Way I See It, tending to veer from pure mid-‘60s Motown for a more expansive approach that incorporates a number of late-‘60s and early-‘70s sounds, including Holland-Dozier-Holland’s grittier post-Motown work and early Philly soul, not to mention an apparent nod to Ray Charles on “Day Dreams.” Like The Way I See It, this is a big production. Saadiq plays the majority of the drums, guitars, and keyboards, but he is joined by dozens of string and horn players and a handful of crucial collaborators, including past associates and session legends Jack Ashford (percussion) and Paul Riser (string arrangements), as well as Earth, Wind & Fire's Larry Dunn and Little Dragon's Yukimi Nagano. These songs are tied together by the Mellotron, a vintage keyboard -- commonly associated with psychedelic and progressive rock recordings, but not foreign to soul -- that evokes diseased flutes and wheezing strings. Saadiq tends to use the instrument for shading, but it is central to the drama of “Go to Hell” (where it is played by Amp Fiddler), and it adds a melancholic tint to the otherwise happy-go-lucky “Movin’ Down the Line.” The songs that do not leave an immediate and lasting impression make moves on a subconscious level. “Good Man,” the most compelling song on the album, works both ways. A mini-epic of trouble-man soul, somewhere along the lines of Ohio Players' “Our Love Has Died” and a missing cut off David Porter's Victim of the Joke?, its elegant misery is instantly striking, enhanced by Taura Stinson's pouty guest vocal. After a few listens, that point where Saadiq reaches a falsetto, at the end of “So much better now, without you” -- just as the horns punch in -- raises the goose pimples and does so with successive plays. The album does not merely transcend period-piece status. It’s the high point of Saadiq’s career, his exceptional output with Tony! Toni! Toné! included.