Recorded in 1970 at Rudy Van Gelder's studio in New Jersey under the production auspices of Creed Taylor, the arrangement and conducting skills of Deodato, and the engineering expertise of Van Gelder himself, Jobim's Stone Flower is quite simply one of his most quietly stunning works -- and certainly the high point of his time at Columbia. Nearly a decade after the paint peeled from the shine of bossa nova's domination of both the pop and jazz charts in the early '60s, Creed Taylor brought Jobim's tender hush of the bossa sound back into the limelight. With a band that included both Jobim and Deodato on guitars (Jobim also plays piano and sings in a couple of spots), Ron Carter on bass, João Palma on drums, Airto Moreira and Everaldo Ferreira on percussion, Urbie Green on trombone, Joe Farrell on soprano saxophone, and Harry Lookofsky laying down a soulful violin solo on the title track, Jobim created his own version of Kind of Blue. The set opens with the low, simmering "Tereza My Love," with its hushed, elongated trombone lines and shifting acoustic guitars floating on the evening breeze. It begins intimate and ends with a closeness that is almost uncomfortably sensual, even for bossa nova. And then there are the slippery piano melodies Jobim lets roll off his fingers against a backdrop of gauzy strings and syncopated rhythms in both "Choro" and "Brazil." The latter is a samba tune with a sprightly tempo brought to the fore by Jobim's sandy, smoky vocal hovering ghost-like about the instrumental shimmer in the mix. Take, for instance, the title track with its stuttered, near imperceptible percussion laid under a Jobim piano melody of such simplicity, it's harmonically deceptive. It isn't until Lookofsky enters for his solo that you realize just how sophisticated and dense both rhythm and the chromatic lyricism are. The album closes with a reprise of "Brazil," restating a theme that has, surprisingly been touched upon in every track since the original inception, making most of the disc a suite that is a lush, sense-altering mediation, not only on Jobim's music and the portraits it paints, but ON the sounds employed by Taylor to achieve this effect. Stone Flower is simply brilliant, a velvety, late-night snapshot of Jobim at his peak. 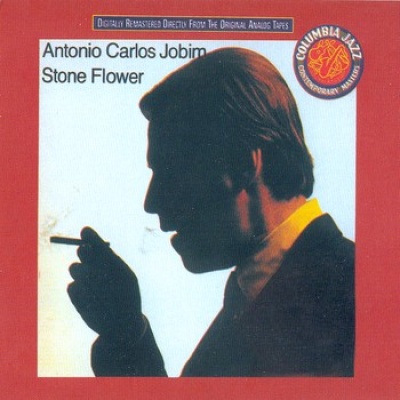