Steppin' Out with the Grateful Dead: England '72 Review

The Grateful Dead's first extended tour outside the United States took them to Europe in the early spring of 1972. The tour has been well documented on several other multi-disc packages -- most notably Europe '72 (1972) and Hundred Year Hall (1995). While both have obvious merit to the rabid enthusiast as well as the casual listener, they likewise fall short of recalling the exploratory essence and improvisational apex that was propelling the band throughout this era. Steppin' Out With the Grateful Dead: England '72 focuses specifically on the seven performances that the septet played in England. From these shows a total of well over five and a quarter hours have been culled to create the first package in which there is plenty of room to allow the Dead to weave their intangible magic organically. By this time, much of the band's repertoire had shifted from the aggressive proto-punk psychedelia and extended instrumental jams of the mid- to late '60s into a much more melodic trend defined by shorter and otherwise self-contained compositions. The overwhelming success of their last studio efforts -- American Beauty and Workingman's Dead -- as well as the eponymously titled live release presented a new facet to their craft. The distinct country-rock sound that flavored much of those albums had likewise infiltrated their concert performances. The pure ebb and flow of the shows has been thoroughly maintained by compilation producer David Lemieux -- who likewise came up aces with the song selection. The track list incorporates a few rarely performed covers such as "Rockin' Pneumonia and the Boogie Woogie Flu" and "Hey Bo Diddley" side by side with a few newly mined originals, including "Black-Throated Wind," "Deal," "Greatest Story Ever Told," and "Sugaree," from Jerry Garcia and Bob Weir's respective debut solo discs, Garcia and Ace. Additionally, there are several concurrently new compositions from Ron "Pigpen" McKernan, including "Mr. Charlie," "The Stranger," and "Chinatown Shuffle" -- the latter pair being performed exclusively during this, McKernan's final tour with the band. Years of excessive drinking cut his life tragically short and, apart from one final stateside appearance, he was no longer able to perform with the band he co-founded some eight years prior. Deadheads clamoring for longer, stretched-out sonic explorations will likewise have much to discover and rediscover. Primary among these are the extended "Truckin'" medley, which includes a few stops along the way into "The Other One," Marty Robbins' "El Paso," and "Wharf Rat," as well as nearly an hourlong coupling of "Dark Star" with "Sugar Magnolia" and the old psychedelic standby "Caution (Do Not Step on Tracks)." 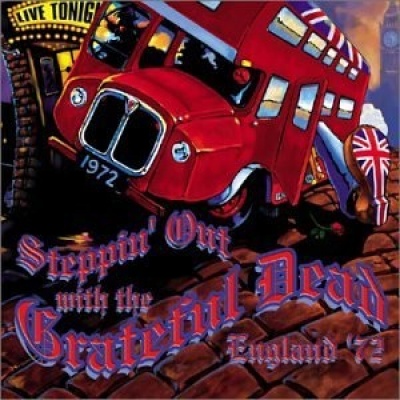 Steppin' Out with the Grateful Dead: England '72 Album Information