Die-hard fans of the Star Wars hexalogy are quite familiar with the epic soundtracks by John Williams and are likely to own the albums that interest them. So it's hard to imagine why Sony has issued Star Wars: The Corellian Edition as a single disc that offers short excerpts from each of the six film scores, though it can hardly be said to be a greatest-hits collection in the usual sense. A promotional sticker advertises the contents as, "The Most Popular Star Wars Themes from All Six Episodes on One CD!" But this is misleading, since the famous doom-laden motive for Darth Vader from Episode IV is missing, as well as the well-known "Princess Leia's Theme" and the Cantina Band music (which actually reached No. 72 on Billboard's Top 100 in 1977), so this CD falls short of its stated aim. The popular "Main Title" fanfare is universally known and is included here, as well as the memorable "End Title" music, but the remaining action sequences and atmospheric scenes are not as recognizable (except to those who have seen all the movies several times) and are not necessarily the best parts of their respective scores. The original performances by the London Symphony Orchestra have been enhanced with DSD remastering, and they are identical to the tracks that appear on the 2004 editions of the soundtracks. So this disc may serve as a sampler to whet casual listeners' appetites for the full CDs, but chances are good that anyone who is already a Star Wars buff will not need this teaser, except perhaps as a collectible. 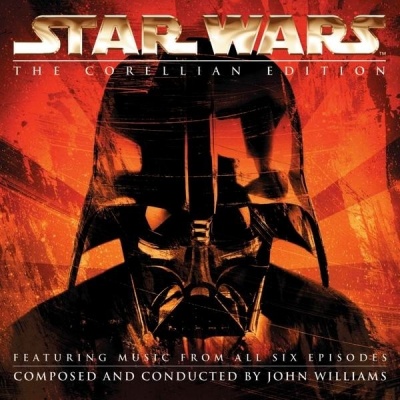