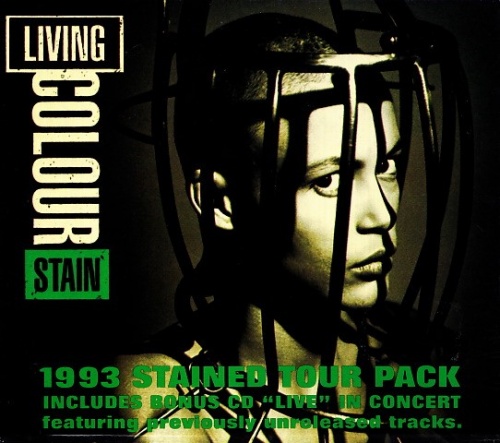 After wrapping up their stint with Lollapalooza '91, Living Colour took some time off to decide what to do next. Shortly after, bassist Muzz Skillings and the rest of the band decided to part company and was replaced by session ace Doug Wimbish (whose credits included work with Jeff Beck, Madonna, Mick Jagger, etc.). Produced by Ron "Bad Brains" St. Germain, Living Colour's Stain showed the band's darker side even more, as samples were now added to the sonic mix. The tracks were more focused and streamlined when compared to the all-encompassing compositions on 1990's Time's Up, but were just as hard-hitting and thought provoking. The pessimistic viewpoint evidenced in such past tracks as "Type" can be found again in such tracks as "Go Away," "Ignorance Is Bliss," and "Never Satisfied," while "Postman" pulls no punches in its depiction of a deranged killer. The explosive "Auslander" was one of the album's best tracks, as was the melodic rocker "Leave It Alone" and the superb ballad "Nothingness," which deserved to be a hit. Although some of the songs miss the mark ("Bi," "This Little Pig," etc.), Stain was another engaging release from Living Colour. Although the album made the Top 40 and just missed going gold, the group would disband a year after the ensuing tour (citing "musical differences").