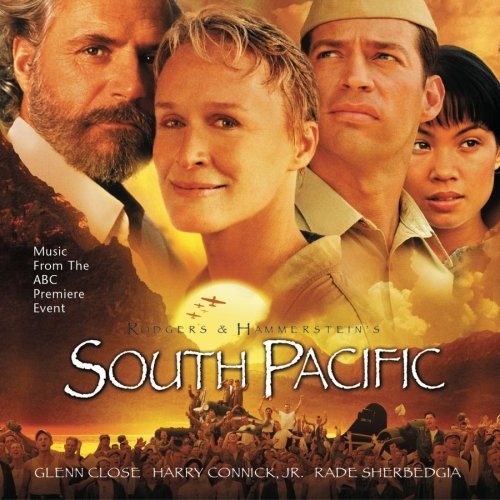 South Pacific, Richard Rodgers & Oscar Hammerstein II's fourth musical, was their second most successful in terms of the run achieved by the 1949 original production on Broadway, behind only their first show, Oklahoma!, which at the time meant it was also the second-longest running musical in Broadway history. But South Pacific did even better in secondary media. Its original cast album still holds the record for the longest stay at number one in the history of the Billboard magazine album chart, 69 weeks; the movie version, released in 1958, was the highest grossing film of the year; and the original soundtrack album, though it topped the Billboard chart for a mere 31 weeks(!), was probably the best-selling LP of the second half of the 1950s. The success of the film and soundtrack notwithstanding, the movie version did not show off the work to its greatest advantage, what with the peculiar color filters that marred the cinematography and the extensive dubbing of the lead performers. So, a new television production is more than welcome. Unfortunately, casting choices and musical revisions prevent this new soundtrack from excelling. A raft of new arrangers has been brought in to replace Robert Russell Bennett's original orchestrations, a decision that only makes sense when you consider that the cast has been filled with a group of modest vocal talents who couldn't possibly have hit the notes Bennett set for the original cast. Of particular note is Rade Sherbedgia in the male lead, Emile de Becque, a part written for opera bass-baritone Ezio Pinza that features such songs as "Some Enchanted Evening" and "This Nearly Was Mine." Sherbedgia is a conversational tenor, and the songs have been re-orchestrated for his limited abilities. This throws out the main musical structure of the show, the dichotomy between de Becque's opera-like arias and female lead Nellie Forbush's more pop-sounding songs, which echoes the differences in their backgrounds. That dichotomy is, of course, the major theme of South Pacific, and by homogenizing the score the arrangers have missed this point. Harry Connick, Jr., as second male lead Lt. Joseph Cable, turns in his usual Frank Sinatra Jr. imitation. By far the best of the lot is Glenn Close, although, at 53, she's a bit long in the tooth to be playing Nellie Forbush. You can always see the wheels turning in a Close performance, and she is as actorly here as ever, but much of the time she seems to be channeling Mary Martin, the original Nellie, and that's not a bad thing. In the end, South Pacific survives its 2001 television treatment, but anyone wanting to hear what the score should sound like still must be directed back to the original Broadway cast album.