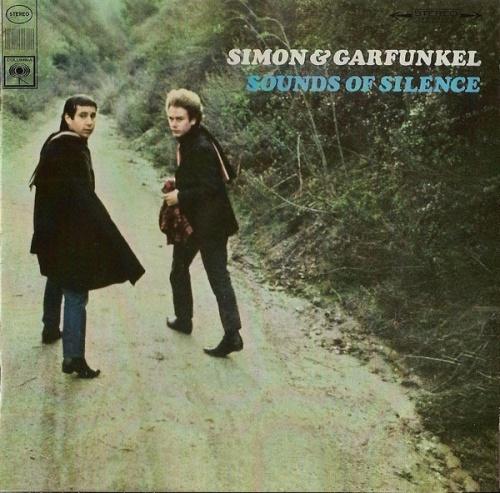 Simon & Garfunkel's second album, Sounds of Silence, was recorded 18 months after their debut long-player, Wednesday Morning, 3 AM -- but even though the two albums shared one song (actually, one-and-a-half songs) in common, the sound here seemed a million miles away from the gentle harmonizing and unassuming acoustic accompaniment on the first record. In between, there had been a minor earthquake in the pop/rock world called "folk-rock," which resulted in the transformation of their acoustic rendition of "The Sound of Silence" into a classic of the new genre, complete with jangling electric guitars and an amplified beat that helped carry it to the top of the charts. The duo hastily re-formed, Paul Simon returning from an extended stay in England with a large song bag (part of which he had already committed to vinyl, on his U.K. album The Paul Simon Songbook). Simon & Garfunkel rushed into the studio in the fall of 1965 to come up with a folk-rock album in a hurry: fortunately, they'd already recorded two sides, "Somewhere They Can't Find Me" (actually, Simon's rewrite of their first album‘s title track) and "We've Got a Groovey Thing Goin'," both featuring a band accompaniment. Davy Graham's bluesy "Anji," a rare instrumental outing by Simon, filled another slot, and "Richard Cory" filled another. The latter, Simon's adaptation of poet Edwin Arlington Robinson‘s work, was a sincere effort at relevance -- Richard Cory has every material thing a man could want but still takes his own life, a hint at one aspect of middle-class teenaged angst of the mid-'60s; high school English teachers were still using it to motivate students in the '70s. Though a rushed effort, this was a far stronger album than their debut, mostly thanks to Simon's compositions; indeed, in one fell swoop, the world learned not only of the existence of a superb song-poet in Paul Simon, but, in Simon's harmonizing with Art Garfunkel, the finest singing duo since the Everly Brothers. But it also had flaws, some of which only became fully apparent as their audience matured: the snide, youthful sensibilities of "I Am a Rock" and "Blessed" haven't aged well. And the musical concessions, on those tracks and "Richard Cory," to folk-rock amplification have also worn poorly; even in 1966, the electric guitars, piano, organ, and drums, sounded awkward in context with the duo's singing, like something grafted on, though in fairness, those sounds did sell the album. The parts that work best, "Kathy's Song" and "April Come She Will," two of the most personal songs in Simon's output, were similar to the stripped-down originals Simon had cut solo in England, and among the most affecting (as opposed to affected) folk-style records of their era; similarly, Simon's rendition of the folk-blues instrumental "Anji" is close to composer Davy Graham's original, just recorded hotter, while "Leaves That Are Green" is pleasantly if unobtrusively ornamented with electric harpsichord, rhythm guitar, and bass.