Songs of Our Soil Review

One of Cash's earlier pseudo-concept albums, this doesn't exactly follow a specific theme like farming or hymns of the American land the whole way through. Rather, it's a collection of a dozen songs that generally are on the folkier and more Americana-centered side of Cash's repertoire, though of course such songs have always had a prominent place in his material. He bagged the songwriting credits for all but one of the songs on Songs of Our Soil, skillfully relaying tales of drinking, disastrous farm flooding ("Five Feet High and Rising"), the vicious circle of sharecropping ("The Man on the Hill"), death and burial ("The Caretaker"), Native Americana ("Old Apache Squaw"), and spiritual-like piety ("It Could Be You [Instead of Him]"). The death-in-the-desert tale of "Hank and Joe and Me" might get unintentionally camp with its rather jaunty depiction (complete with gospel-like backup choral vocals) of the narrator dying of thirst on a quest for gold. Although "J. Cash" gets the songwriting credit for "I Want to Go Home," in fact it's his version of the homesick sailor folk tale more commonly known as "Sloop John B," recorded elsewhere by the Weavers, the Kingston Trio, the Beach Boys, and others. It's a good set, though pretty short at 26 minutes, and lacking the hits or classics that decorate some of his other vaguely Americana concept albums. 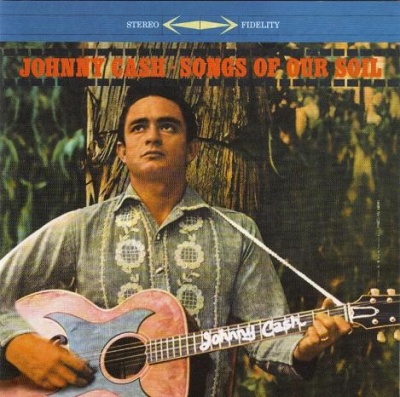 Songs of Our Soil Album Information