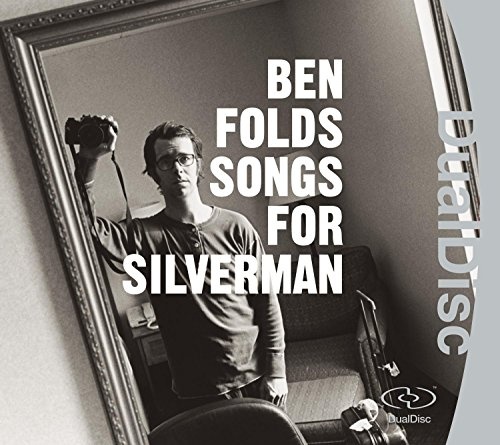 Ben Folds is at his best when he melds the acerbic with the heartfelt, a balancing act that he's honed to perfection on the warm and ballad-heavy Songs for Silverman. Opening track "Bastard," with a fuzzed-out bassline right out of 1995, kick-starts a record that plays like a show in reverse. The meat's all upfront, so those expecting a show-stopping encore will just have to listen to it backward, as this is Ben Folds the family man, not the embittered youth who joined the "Army" on 1999's Unauthorized Biography of Reinhold Messner. While there is a warm undercurrent of tenderness that runs through Silverman, it's never cloying or clichéd; rather, Folds can take the simplest notion, insert a gorgeous piano motif, and hit that one line in falsetto that gives you goose bumps -- the lovely "Time" is a perfect example -- without breaking a sweat. On a song for his daughter ("Gracie") he teases, fawns, and pontificates without ever seeming overbearing -- a line like "you can't fool me/I saw you when you came out/You've got your mama's taste but you got my mouth" makes even the most spawn-fearing post-hipster reconsider the prospect of parenthood. However, Folds' brand of wry observation is most effective when it's applied to an antagonist like on the aforementioned "Bastard" ("You get smaller as the world gets big/'The Whiz Man' will never fit you like 'The Whiz Kid' did"), and while his barbs have taken on more of a nostalgic bent, soaring tracks like "Jesusland," "You to Thank," and "Late" -- the latter is a stark, simple, blue-collar ode to Elliott Smith -- confirm what many already knew, that Ben Folds is in this for the long haul, and you the consumer are luckier for it. [Songs for Silverman is also available in a "special package" edition that boasts a 40-page booklet and a DVD, as well as on limited-edition vinyl with the bonus track "Bitches Ain't S**t."]