Jimi Hendrix, Billy Cox, and Buddy Miles famously played two shows each night on December 31, 1969 and January 1, 1970, leading to one of the greatest live LPs of all time: Band of Gypsys. Other material from the shows has been officially released, but the only complete set available prior to this was the first show on December 31. Finally, after nearly 50 years, all four complete shows are available together, with fantastic sound, for the first time. Well, almost. Most Hendrix fans probably wouldn't notice, but the hardcore collectors who have been waiting for this set know that this is not every note played during those shows.

It's easy to understand why the Buddy Miles features "Changes" and "We Gotta Live Together" were edited down: Miles tends to get carried away with his scatting improv and audience participation. The Band of Gypsys album had edits of those songs from the second show on January 1, and Songs for Groovy Children restores some of that missing material, but it doesn't necessarily make for better listening. "We Gotta Live Together" was expanded from just under six minutes on the BOG album to just under ten minutes here. It's really hard to imagine more than a couple people who really want to hear the full 18 minutes. However, it's harder to justify the five complete tracks left off the second December 31 set. Those should have been included.

Completist collector complaints aside, this is an amazing set. The band is completely locked into each other and Hendrix turns in some truly astonishing playing. Hearing all four shows gives a better idea of how improvised some of these performances were, yet how in tune the players were with each other. Eddie Kramer has done a great job with the sound and Billy Cox's liner notes are also excellent. These are legendary performances for good reason and it's great to finally have them officially released together as a set. 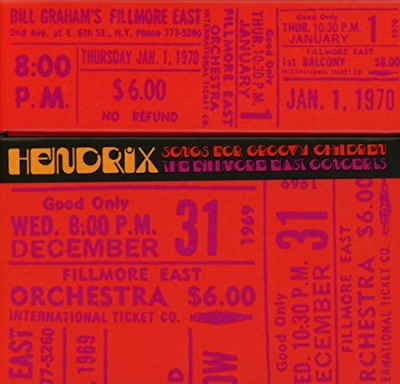