Song for My Lady Review

This is Lucien's first album with Columbia. After making three albums for RCA in five years, he didn't attain superstar status, but this, as well as early-'70s efforts I Am Now, Rashida, and Mind's Eye made Lucien one of music's most respected though sluggishly selling acts. This 1975 effort deftly mixes cover versions of well-known songs as well as Lucien's always-creative originals. With a switch to a bigger, more influential label, the changes are minimal. The instrumentation and production are little more palpable, but not by much. The biggest difference here is Lucien's voice; it became warmer, more polished, and accessible. But while that looks great on paper, with an artist with a strong persona like Lucien, it's either going to be hit or miss. He is undoubtedly on his game here, and like the rest of his catalog, this is alternately eccentric and romantic. Due to the production and his focus, Song for My Lady became the album which all of his subsequent efforts were measured against. On his brilliantly arranged and sung cover of Antonio Carlos Jobim's "Dindi," Lucien uses all of his registers, from the high-pitched sighs to the croaky lows. His take on Bernard Ighner's "Motherland," however, went on for one minute too long. That being said, everything Lucien did on this effort was at least interesting. "Maiden Voyage" is a remake of Herbie Hancock's classic instrumental. Although "helping" a woman through her "first affair" wasn't hinted at on Hancock's original, Lucien saw a prime opportunity. With lyrics like "Time for your debut," and "Soon you'll cry, lovely things you'll say," Lucien was inspired enough to turn in one of his most assured and fulfilling vocals. He also succeeds with the uptempo offerings. "Soulmate" and "Creole Lady" both display odd production values and his almost naïve though likeable takes on love. The atmospheric title track has him crooning such lines as "Tell her that I care, tell her spring is here," like it's pure poetry. Song for My Lady didn't make Lucien a giant star, but it's simply one of the more visionary and satisfying albums of the jazz/R&B genre. 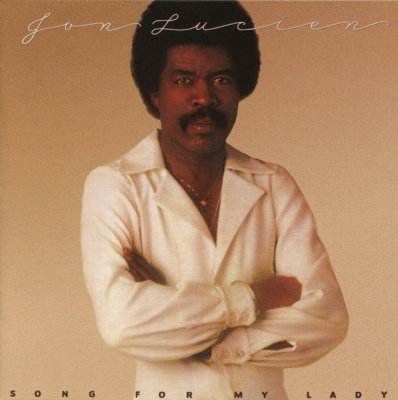 Song for My Lady Album Information