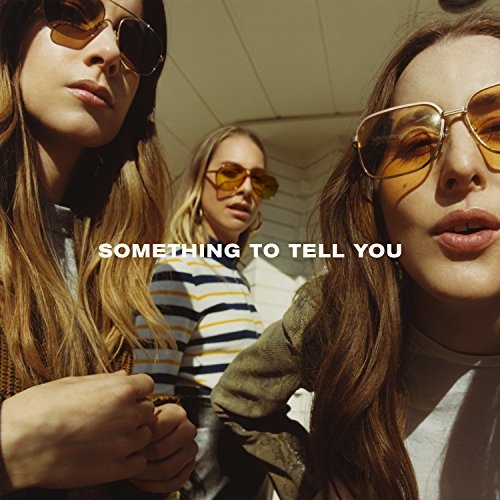 During the years between Days Are Gone and Something to Tell You, Haim entered their mature phase -- which is saying something, since the '80s and '90s mainstream pop that makes up the backbone of their music isn't exactly impetuous-sounding to begin with. But where the Haim sisters made those influences seem not just fresh but inventive on their debut, this time they embrace their straightforwardness. More than ever, Haim calls to mind Sheryl Crow, Shania Twain, Amy Grant, and the era's other chart-toppers. They sound uncannily like Wilson Phillips on "Found It in Silence"'s crisply empowering pop, and could pass for Fleetwood Mac on the throaty confessions of "Nothing's Wrong." Something to Tell You's best songs use this baked-in familiarity in equally reassuring and satisfying ways: As it strikes the perfect balance between heartfelt and glossy, the chorus of "Want You Back" feels like returning to an old flame's arms. "Little of Your Love" and its perfectly timed breakdown are a testament to how well Haim uses pop's most reliable tricks, while the irresistible beats and guitars on "Kept Me Crying" feel like a sadder, wiser callback to "The Wire," proving that while there's nothing as audacious as "My Song 5" here, the band hasn't extinguished its spark entirely. Too often, though, Something to Tell You crosses the line from familiar to predictable. Haim pairs ultra-smooth sounds with lyrics about love gone wrong that sound more than a little samey on the title track and "You Never Knew." And while Days Are Gone had hooks for days, this time Haim's songwriting just isn't as attention-getting; production flourishes such as the processed backing vocals on "Ready for You" and "Right Now"'s artfully rough guitars threaten to overpower the songs themselves. Moments like these add to the feeling that Haim are more focused on craft than excitement. The ways they refashioned vintage pop on Days Are Gone felt risky, but Something to Tell You offers safer, smaller pleasures.