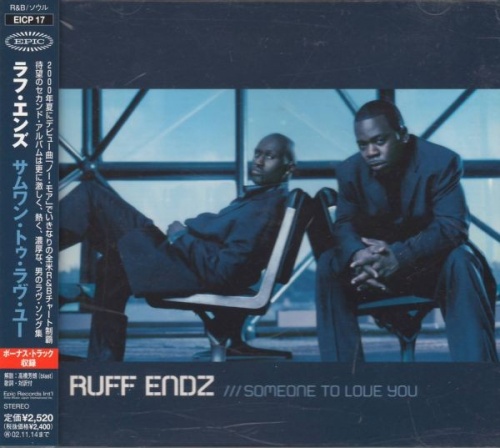 By the time that Someone to Love You, the second Ruff Endz album, was released, the title track, its first single, had stalled halfway up the R&B Top 40. That did not seem to bode well for the album, since the still-developing duo remained best known for their 2000 debut single, "No More," rather than their first album, Love Crimes. And that was a shame, because Someone to Love You marked an improvement over its predecessor. Although the disc was typical of contemporary R&B in that it employed numerous writer-musician-producer teams -- no less than 14 names earned the title "producer" in the credits -- group members David "Davinch" Chance and Dante "Chi" Jordan took a greater creative role in the music, and that may have contributed to committed performances on their part. As usual, they led with ballads, their strong suit, beginning with dreamy romantic sentiments that later gave way to more erotic messages ("Shake It") and then outright pleadings for sexual fulfillment, sometimes of an acrobatic nature, such as on "Kamasutra" and "Threesome" (sample lyric: "Slip in the Jacuzzi, and we can make a movie"). Oddly, the album's best ballad, the impassioned "You Mean the World to Me," was buried in 12th place in the sequencing of an album with 14 tracks. Chance and Jordan were somewhat less impressive on the up-tempo numbers, which were less emphasized than on their previous release. On "Would U Leave Me" and "If It Wasn't For...," they investigated that recurrent topic among newly rich hip-hoppers, which can be summed up as, "Baby, do you love me or my money?" Dance tracks like "Don't Stop" could be anemic, but Ruff Endz is really about the loverman ballads, and Someone to Love You contained some excellent ones.